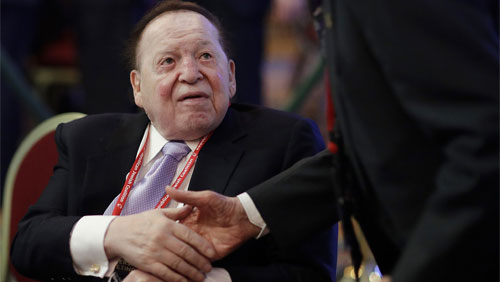 Brazil is the world’s fifth-largest country. So, when Las Vegas Sands (LVS) CEO Sheldon Adelson sees it, he sees dollar signs. Adelson traveled to the country this past week where he reaffirmed his plans to build an integrated resort (IR) there.

Adelson paid a visit to Brazil’s most populated city, Sao Paulo and was asked by a local media outlet about his purpose in the country. Adelson, who has an estimated net worth of about $40 million, replied that he was considering “investing in one or more integrated resorts.” The visit followed one made by the casino mogul to Rio De Janeiro in May of last year. During that visit, he met with Brazilian President Michel Temer to discuss the possibility of constructing an $8-billion IR in the country.

Adelson faces an uphill battle. Gambling has been illegal in the country since 1941, but there have been recent pushes to change legislation in favor of allowing casinos. Proponents argue that the casinos will provide much-needed revenue to the country, giving it the ability to pay down its growing debt. There are two bills currently being reviewed by legislators on different levels, but passage of any gambling laws won’t come immediately.

According to Forbes Magazine, the 84-year-old Adelson is ranked 21 on the list of the world’s billionaires. He continues to expand his empire, and doesn’t show any signs of stopping.

LVS owns five casinos in Macau, as well as its property in Las Vegas and the Marina Bay Sands in Singapore. The majority of its revenue comes from the operations outside of the US. Last year, 90% of the company’s total pre-EBITDA (earnings before interest, taxes, depreciation and amortization) earnings came from the overseas operations.

LVS is currently investing $1.1 billion in a major renovation project at its Cotai Central resort in Macau. Adelson has repeatedly said that there is still a lot of opportunity in the market due to its continued growth and additional expansion in the area is not off the plate.

In its first-quarter filing for 2018, LVS reported a 16.7% increase in revenue. The first three months of the year brought in $3.58 billion for the company, up from $3.11 billion during the same period last year. Its earnings before EBITDA climbed 30.7% to $1.5 billion.