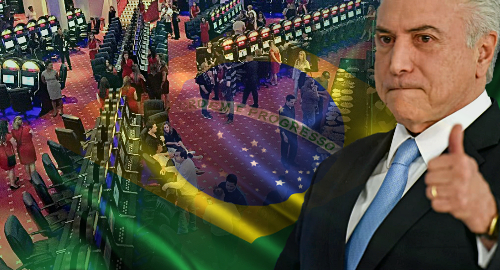 Last week saw the inaugural meeting of Brazil’s Chamber of Deputies’ new parliamentary front for gambling regulation, which has set a goal of approving long-stalled legislation that would authorize the launch of land-based casinos and other gambling options, including as-yet undetermined online gambling products.

Brazil’s President Michel Temer has indicated he will favorably receive any gambling bills that emerge from Congress, in part due to the government desperately needing new sources of revenue. But Temer has more immediate concerns, including a vote on Wednesday on whether he should stand trial on charges of racketeering and obstruction of justice.

Temer is expected to survive Wednesday’s vote, which would require a two-thirds majority of the Chamber’s 513 deputies to send him to trial. It probably doesn’t hurt that 185 of those deputies are also the current subjects of corruption probes, so, you know, when in Rio…

SANTA CATARINA PREPS ONLINE LOTTERY COOPERATIVE
Meanwhile, the southern state of Santa Catarina is pushing ahead with plans to launch a new online lottery. Local media outlet Clicatribuna reported that the state generated legal lottery sales of $208m in 2016, but that this money was hoovered up by the Caixa Economica Federal lotteries, leaving little left over for the state.

In response, the state’s lottery retailers have formed a cooperative venture to offer online lottery sales, with a scratch card business to follow. Gilmar Cechet, head of the Union of Lottery Entrepreneurs of Santa Catarina, said the concept has the law on its side, and that part of the profits will go toward funding local health services.

WINFIL LAUNCHES LAND-BASED CASINO WITH FREE-PLAY SLOTS
A slightly bolder experiment is currently underway in Porto Alegre, where last week saw the opening of a new land-based gaming venue. The Winfil venue looks for all the world like a casino, with around 460 slot machines taking up most of the floor between the bars and restaurant spaces, although such activities aren’t yet legal in Brazil.

Winfil is backed by Rogerio Dell’Erba Guarnieri and the Catalan-based Grupo Pefaco, which operates casinos in eight African countries and in Paraguay. Winfil was originally scheduled to open in September in Porto Alegre due to the state of Rio Grande do Sul’s courts having very briefly tolerated the activities of other gaming operations, including bingo halls.

However, the state Public Prosecutor’s office sought and received a court order that threatened full enforcement of the law should any gambling be found to be taking place in Winfil. Winfil opened last Thursday, although not before some emergency modifications.

Local media quoted Winfil’s lawyer Laerte Luis Gschwenter saying the property’s gaming devices were “similar” to slot machines, “but technically and legally cannot be considered as slot machines” since they had been altered to disable players from depositing any cash. Instead, the machines were in ‘demonstration’ mode, with free-play credits provided by the house.

Apparently, Winfil’s plan is to position the property so that it’s ready to respond with lightning speed to any change in Brazil’s gambling laws. Pefaco reportedly plans to open 20 similar establishments in the state in order to get a leg up on would-be competitors.