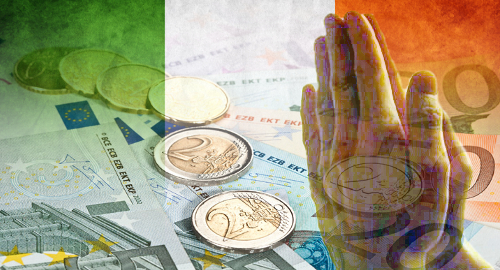 Ireland’s bookmakers are praying that the government will consider alternatives to its current plan to double the tax on betting turnover.

On Sunday, the Independent reported that some members of Ireland’s parliament were advancing an alternative tax plan favored by the Irish Bookmakers Association (IBA). A Finance Bill amendment seeks to impose a 10% tax on retail wagering revenue while online betting licensees would face a 20% revenue tax.

The amendment, which was put forward by Independent parliamentarian Éirann Michael Healy-Rae, claims that the government could reap an annual €25m in extra tax revenue via the switch to a tax on operators’ gross profits. That’s roughly half the €51.6m expected to be raised via the turnover tax hike.

However, the IBA believes the revenue tax model would prevent the thousands of job losses that would result from the increased turnover tax. The IBA says the 2% turnover tax would result in the likely closure of hundreds of the 855 betting shops still operating in the country.

Last week, Tony Foley, an emeritus associate professor of economics at Dublin City University, claimed that the government’s expectation of a tidy profit from the turnover tax would actually result in a €35m reduction in tax collected if the IBA’s predictions of massive shop closures are accurate.

Healy-Rae’s amendment will reportedly be debated in parliament this week before an expected vote on the Finance Bill next week. Also up for debate is a separate amendment put forward by the Finna Fail party that would require the government to conduct a proper economic assessment of the increased turnover tax.

Paddy Power Betfair, which operates 261 Irish betting shops, has warned that it faces a nearly €23m hit from the new turnover tax. Boylesports, the country’s second-largest bookie, has suggested it could close up to one-fifth of its 250 Irish shops, while Ladbrokes has announced plans to significantly curtail its racecourse betting presence and racing sponsorships.