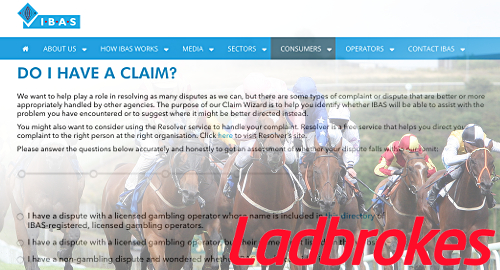 UK betting operator Ladbrokes is bracing for an arbitrator’s verdict on whether or not the bookie’s software was mishandling punters’ attempts to place wagers.

The disputes all center around racing wagers that were declined, but all three punters claim to have received an official ‘bet number,’ which suggests the bets were actually accepted. Moreover, despite the post-race realization that the wagers had been declined, the punters claim their wagers were graded as ‘cancelled,’ prompting more confusion as to whether or not the bets may have been accepted at some point before being declined.

The three wagers were individually placed over a period of several months, which, if the IBAS determines there’s some glitch in Ladbrokes’ software, opens up the possibility that there are many more such cases that have so far gone unreported. IBAS has offered no indication when it might issue a ruling on the matter.

This week, IBAS issued its annual report for the 12 months ending September 30, during which time it completed investigations of 3,595 complaints, 1,923 of which were decided in favor of the operator, 227 in the customer’s favor, while the remaining 1,445 were resolved to customers’ satisfaction prior to a ruling being issued.

Gamblers have long complained about having their bets refused or so severely limited as to make wagering pointless. Partly in fear of failing to uphold the UKGC’s new customer-friendly approach, some UK operators have begun guaranteeing minimum bet limits, albeit with some caveats.