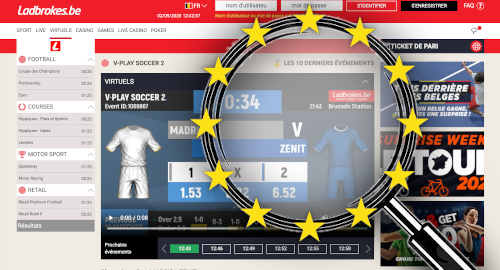 On Wednesday, the European Commission (EC) said it had launched a probe into Belgium’s decision to award GVC’s Belgian subsidiaries the right to operate both land-based and online virtual sports betting while denying that right to other operators.

The Derby SA subsidiary got the nod for retail virtual bets via digital kiosks at its 300+ local shops in February 2014, while online virtual permission was granted in March 2015. The EC said it received complaints in March 2019 from two of Ladbrokes local rivals that their efforts to acquire similar virtual rights in 2015 and 2016 proved fruitless.

The EC issued a brief statement saying Ladbrokes’ virtual approval “may have resulted in the betting company enjoying a de facto exclusive right to operate virtual betting in Belgium since 2014, without any remuneration in favor of the Belgian state by Ladbrokes in return.” The EC went on to say this “measure may have distorted competition and the Commission has doubts that it complies with EU state aid rules.”

Derby’s virtual operations in Belgium have been the subject of numerous legal challenges over the years, with land-based gaming hall operator Rocoluc NV the first to sound the alarm over Derby’s virtual kiosks.

The Belgian Coffee Federation (FedCaf) also raised a stink after determining that its bingo business had fallen 50% following Derby’s retail virtual launch. Derby’s betting shops reportedly generated up to one-third of their revenue from the virtual kiosks.

Derby’s virtual betting authorization expired in June 2017 but the company continued to offer the product until the following March, prompting the Belgian Gaming Commission (BGC) to order Ladbrokes to suspend all local operations for a 24-hour period on September 3, 2018 as punishment.

However, the government issued a royal decree in May 2018 that included virtual betting under its list of approved games of chance that all F1 license holders (retail betting operators) could now operate.

But FedCaf wasn’t done with Derby and a Belgian court ordered Derby to halt virtual operations under threat of a €10k penalty per violation with a €1m cap. In August 2019, the Brussels Court of Appeal upheld this ruling but removed the €1m ceiling.

FedCaf said at the time that this “illegal activity … was long tolerated by the [BGC] outside any legal framework.” Undaunted, Derby simply vowed to keep appealing the matter up the legal food chain. And here we are.