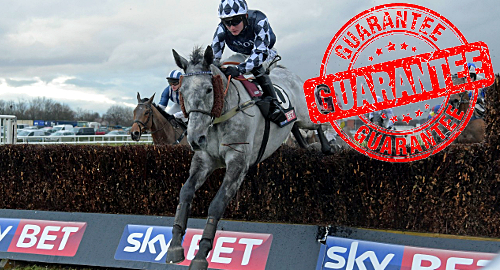 UK online gambling operator Sky Betting & Gaming (SB&G) has become the latest to offer a ‘minimum bet to win’ guarantee to all race betting punters, although some conditions apply.

On Monday, SB&G confirmed that it will now lay any horse to lose at least £500, provided the wager is made after 10am on the morning of the race. The guarantee also only applies to Class One or Two races, only covers the win portion of each-way bets and doesn’t apply to multiples.

SB&G’s announcement follows similar pledges from major UK bookmakers such as Betfair, BetVictor and William Hill, each of which have their own fine print to consider, but SB&G’s race betting business is believed to eclipse all those other operators, making this very good news for UK race bettors indeed.

The push for an industry-wide minimum bet limit (MBL) came via the imposition of a similar scheme in Australia’s racing market in 2015. Bettors’ rights groups such as the Horseracing Bettors Forum (HBF) and Justice For Punters soon began advocating for similar treatment from UK betting operators.

The HBF tweeted out its support for SB&G’s new policy, saying that while it was “not as comprehensive a provision as some, it is a further step in the right direction.” Justice For Punters also celebrated the news while hoping for a day when “every sports betting market will have an MBL unless the gambling industry and officialdom produce evidence as to why not.”

In January, SB&G CEO Richard Flint appeared at an All-Party Betting & Gaming Group seminar at which he defended the right to refuse certain punters’ wagers, although he suggested an MBL tradeoff under which punters who sought best odds guarantees could forego their right to MBL.

SB&G was acquired in April by The Stars Group, the Canadian parent company of PokerStars, although the UK’s competition watchdog is still mulling whether to allow the parties to consummate their $4.7b marriage.

HBF LOOKING FOR NEW BETTING BLOOD
Meanwhile, Monday also saw the HBF issue an invitation to the betting community to replace outgoing members as part of its “planned periodic refresh of its membership.” The group welcomes applications from “a broad range of the public” to ensure maximum diversity and inclusivity.

The HBF consists of a nine-member forum of volunteers who serve three-year terms, meet four times a year and “correspond extensively” in between those meetings. Applicants are asked to submit 500-word pitches demonstrating their betting aptitude and understanding of topical matters. Full details available here.