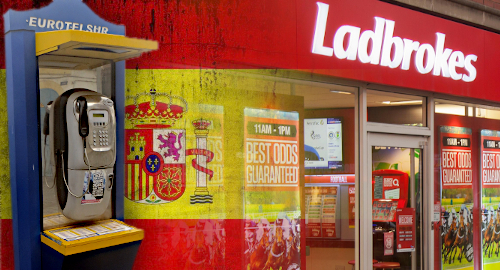 UK betting operator Ladbrokes is being sued for millions of pounds by a disgruntled gambler who claims the company should have known his bets were placed illegally.

This week, Terry Allan, who owns a recruitment firm in Abderdeen, Scotland, sued GVC Holdings’ Ladbrokes division in London’s High Court, seeking reimbursement of £3.37m that the 57-year-old Allen claims to have lost betting with the firm over a three-year period spanning 2016-18.

Allen says his total betting losses are significantly greater than £3.37m, but he’s yet to calculate losses for the years 2014 and 2015. Allen is also seeking 8% annual interest on both his declared losses and those he’s yet to reveal.

Allen claims to have bet up to £400k per week through a specific Ladbrokes betting shop in Aberdeen’s Rose Street, becoming so familiar to shop staff that he had a dedicated phone line installed to ensure he didn’t have to wait to make his wagers.

The gist of Allen’s lawsuit is that he made many of these bets from his holiday home in southern Spain. Since Spain had long since established a domestic gambling market, Allen claims that wagering with any operator outside the country was illegal. Allen further claims that Ladbrokes managers instructed staff not to inquire as to his whereabouts, apparently based on the belief they couldn’t deny what they didn’t know.

Allen claims staff would have been well aware of his whereabouts, having turned down invitations to Ladbrokes hospitality events due to his travels. Allen further claims that shop staff advised him to use the Ladbrokes Premier service while abroad and that he sometimes placed bets over the phone while golfing in Spain with Ladbrokes senior management.

A Ladbrokes spokesperson said Allen’s suit was based on “unfounded grounds that certain historic bets were accepted illegally pursuant to Spanish law.” Ladbrokes called the allegations “entirely without merit” and plans to “vigorously” defend itself in court.

Telebetting was once a staple of Ladbrokes’ high-roller business, generating an operating profit of £183.6m in 2007. A decade later, with the action largely shifting online, telebetting managed revenue of only £2.7m. Other companies have long since sought to minimize their telephone operations, with Bet365 hanging up on its high-rollers for good this summer due to lack of interest.