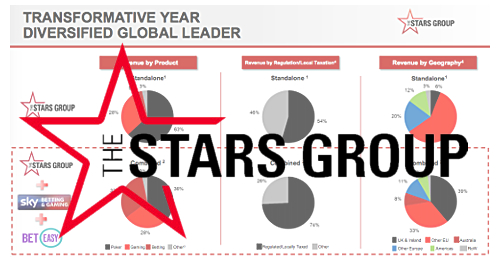 Online gambling operator The Stars Group (TSG) got a revenue boost from its recent acquisition spree although its core poker product failed to match those gains.

The revenue surge reflects new contributions from the company’s acquisitions of a number of Australian online betting brands and the more recent addition of UK online betting giant Sky Betting & Gaming (SBG). TSG derived $220m from its new bolt-ons, meaning organic revenue was up 7% to $351m while adjusted earnings improved 12% to $175m.

GLOBAL A-GO-GO
In TSG’s international markets, its core poker product reported revenue of $212.8m, down 3.9% year-on-year, although it would have enjoyed a very modest 0.3% rise absent unfavorable currency exchange rates. TSG pinned the decline on its exit from the Australian online poker market and cross-selling poker players to other verticals, leaving them with less cash for poker.

Gaming revenue improved 29% to $107.6m thanks to an improved and more varied product, as well as the launch of PokerStars Casino in new markets.

Quarterly real-money active unique players (QAUs) were down 3.1% year-on-year to 2m thanks to the Aussie market skedaddle and PokerStars’ ongoing purge of high-raking but net-withdrawing VIP players. However, the new focus on recreational players resulted in net deposits rising 4% and net yield per player rising 11.3%.

THE CALL
On the analyst call, TSG CEO Rafi Ashkenazi reflected on the company’s shift from a pure poker company to one in which sports betting looms large. Ashkenazi humble-bragged that the company now handles $2.5b in wagers every quarter, while grimly noting that a one-point shift in betting margins can have a $25m impact to the company’s returns.

TSG says its ongoing absorption of SBG’s operations will result in “at least $70m” in the dreaded ‘synergies,’ 53% of which will result in trimming headcount and other staff costs.

TSG is preparing a technological “roadmap” toward a single global sports and casino platform that will start in Italy, likely in Q1 2019. Other markets will hopefully join the “TSG ecosystem” by the end of next year, although SBG’s UK operations will be spared this migration for 18-24 months so as not to disrupt its growth.

In Australia, Ashkenazi said the benefits of having proprietary technology were on full display during last weekend’s racing action, which saw many of BetEasy’s competitors’ websites go offline. Ashkenazi said BetEasy saw an “incremental traffic” gain from these outages and he would be “very happy to pay” the Aussie acquisition earn-out fees if it means he’s taking market share from competitors.

In Russia, the company admitted that the recent “step-up” of Russian banks blocking payments to unauthorized gambling sites would have an unquantified “short-term” impact that the Ashkenazi insisted “wasn’t meaningful.” Ashkenazi expressed hope that things would be back to normal “potentially over the next few weeks.”

In the US, the company’s strategy revolves around market access, which involves finding an appropriate “strategic media partner” to hopefully replicate the successful Sky-SBG combo in the UK. Ashkenazi suggested that TSG was the hot chick at the US media bar, and the company was conducting “many” discussions with potential partners.

TSG is facing a tsunami of regulatory changes across its geographic spectrum that the company suggested could have a $60m-80m impact on 2019’s earnings. Around $30m of this is expected to come from the new UK tax regime.