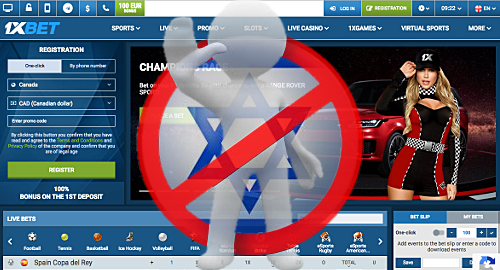 On Monday, Tel Aviv District Court Judge Zion Kapah issued an injunction ordering local ISPs to block the domains of online gambling sites p2vbet.com, 1xbet.com and totobet777.com. The injunction was issued following a request by the state prosecutor’s office and the Israeli Police’s Unit for Combating Economic Crime in Lahav 433.

It’s unclear why these three gambling sites were selected as the first to be targeted under the new law, as the Curacao-licensed p2vbet site doesn’t even appear to offer a Hebrew-language option. Nevertheless, Haim Wismonsky, director of the economic crime unit, said other gambling sites would be targeted in similar fashion in due course.

Israeli business news site Calcalist quoted Wismonsky saying the Israeli police were sharpening their focus on the online gambling sector and was “working to expose sites that operate gambling in order to allow them to be closed.”

Israeli punters who attempt to access the three sites will now be greeted with a message indicating that their patronage of these sites is prohibited under Israeli law. That said, internet rights advocates and digital boffins are mocking the government’s efforts as doomed to fail, citing the ease with which operators and punters can restore access to prohibited sites.

Israel has adopted an increasingly harsh stance toward gambling in recent years, including cracking down on the use of cryptocurrencies to fund gambling transactions, ordering the state lottery to shut its land-based slot machines and banning race betting (the latter move cost the government nearly £5m in compensation).

Israel’s legal gambling options are limited to products offered by national lottery monopoly Mifal Hapayis and the Israel Sports Betting Board. Israel has no legal casinos, and efforts to authorize them have met with fierce resistance from senior government officials. Israeli police have even been ordered not to visit legal casinos when they travel abroad.