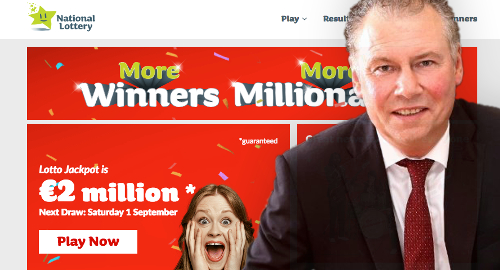 UPDATE: Griffin told The Times that “unhelpful” lottery betting operators were “not the driver of” the price hikes, saying instead that the hike was needed to boost jackpots and make the Lottery’s offering more attractive. Readers are free to make their own interpretation.

Online lottery betting operators like Lottoland are to blame for ticket price hikes, according to the Irish National Lottery’s chief exec.

On Thursday, the Irish Times quoted Irish National Lottery CEO Dermot Griffin slamming lottery betting operators as “rogues” that are “siphoning off” revenue from his business. Said siphoning is also allegedly shrinking the Lottery’s contributions to good causes, which totaled €226m in 2017.

Griffin (pictured) failed to quantify the effect that lottery betting is having on his outfit’s sales, saying only that hard information was hard to come by “but we know we’re losing something.” Griffin claimed the alleged rogues were responsible for cannibalizing up to 20% of state lottery sales in the UK and Australia. Lottoland received its Irish online betting license in 2016.

National Lottery spokesperson Miriam Donohue said Premier Lotteries Ireland (PLI), which won a 20-year license to operate Ireland’s lottery in 2014, is being forced to up its marketing spending in order to compete with lottery betting operators on Google search results.

PLI issued a similar warning in February, when it urged the Irish government to pass legislation banning betting on lottery outcomes. Similar legislation was approved in Australia this year, while UK regulators have prohibited third-party betting operators from taking wagers on non-UK EuroMillions draws last year.

Under sustained assault by lottery monopolies across the globe, Lottoland and other lottery betting sites recently formed a new trade body to educate European regulators and counter the steady drumbeat of negative headlines the operators have endured as their profile rose.

Lottoland’s operations came under particularly harsh fire from UK National Lottery operator Camelot in 2016 after the latter company raised its EuroMillions ticket prices from £2 to £2.50 and Lottoland kept its prices steady.

As of September 1, the Irish National Lottery is raising the price of a standard two-line play with the Lotto Plus option from €5 to €6. Also, Lotto Plus 1 and Lotto Plus 2 draws will double to €1 per line. To soften the blow, the Lottery is doubling the top Lotto Plus 1 prize to €1m. Your move, Lottoland.