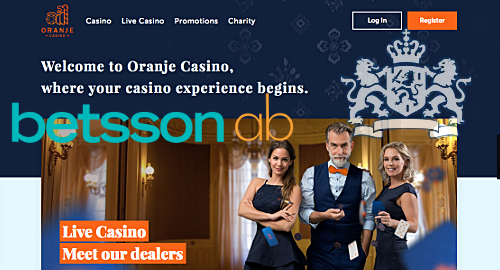 The Netherlands gaming regulator has imposed a €300k penalty on a Dutch-facing subsidiary of online gambling operator Betsson AB for accepting local customers without local approval.

On Friday, the Netherlands’ Kansspelautoriteit (KSA) regulatory body announced that it had imposed a €300k penalty on the Stockholm-listed Betsson’s Malta-based subsidiary Corona, which operates the Dutch-facing Oranje and Kroon online casino brands, for accepting action from Dutch punters without the KSA’s say-so.

The KSA’s report on its investigation reveals that the offending activity took place between May 31 and August 8, 2017. The KSA received complaints regarding the sites prior to this period, but the report notes that the probe was in part a response to “the publicity that Betsson itself had sought following the tightening of enforcement regarding games of chance online without a license on 1 June 2017.”

This ‘publicity’ apparently refers to the complaint Betsson filed with the European Commission regarding the KSA’s announcement of a stiffer range of penalties for a wider variety of perceived violations of existing Dutch gambling law. Betsson has pursued multiple avenues of legal recourse against the restrictive Dutch law, albeit with little success.

The KSA’s report notes that, while Betsson’s Dutch-facing operations alerted Dutch visitors that they weren’t permitted to access the sites, they didn’t actually bar these visitors from accessing the sites. The sites also violated the KSA’s edicts by suggesting that customers use “the most popular online payment method in Holland.”

The KSA investigated other Betsson-affiliated sites as part of its probe, but concluded that these sites hadn’t violated its rules so deigned to let them off with a mere warning.

Betsson issued a statement saying its Corona subsidiary was still mulling whether to appeal the KSA’s penalty. Betsson CEO Pontus Lindwall said the company “shares KSA’s ambition to achieve a high channelization of customers into any future locally regulated environment in the Netherlands and supports the Dutch government’s ambition in moving forward with the legislative process.”

Betsson’s trip to the KSA’s regulatory woodshed may not impact the company’s ability to participate in the Netherlands’ new regulated online market. In July, the Dutch Minister for Justice and Security publicly stated that international operators with a “reliable reputation” shouldn’t be automatically barred from the regulated market.

That is, assuming this market ever materializes. The necessary legislation has been sitting idle in the government’s hands for years, although tentative signs of legislative progress emerged this summer. However, estimates are that the new regime might not be in place until 2020.