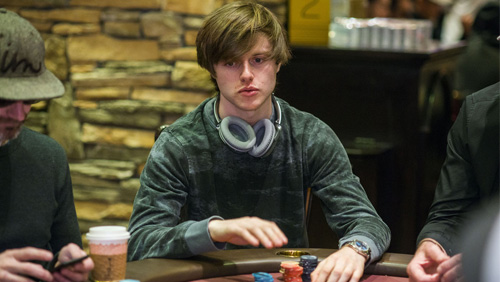 The UK High Stakes crusher, Charlie Carrel, is taking a trip to where it all began as he tries to turn $50 into $10,000 playing the microstakes all the while recording his sessions on Twitch and summarising on YouTube.

What was the man up to?

It seems that sometime in the past few months, the high stakes crusher from the UK has retired from poker. I assume, what that means, is Carrel doesn’t need to play poker for a living anymore and is taking a step down from competing in that manner.

As a man from the UK myself, I want to see more Brits than Stephen Chidwick competing globally in the highest stakes tournament.

But Carrel hasn’t run off into the sunset.

If you’re a fan of the young man and compete in the micro or lower stakes realm, then you’re in for a treat. Carrel has decided to set himself the task of turning $50 into $10,000, playing at those levels, to show amateur poker players that the dream is still alive.

And here’s the best bit.

You can follow his progress live on his Twitch channel, and pick up his primary learning points in summarised YouTube clips.

In Carrel’s Day 1 recap, he shares his exploration into the world of 2nl Zoom on PokerStars. Carrel explains how he began playing in a selectively aggressive way, and here’s the part I love, he then went on to talk about transferring that concept into other areas of life, and this is where Carrel shines. He may be young, but he is full of wisdom and inquisitiveness, and you can learn a lot from him.

In his own words, the super-aggressive style didn’t work out. But ‘money earned’ wasn’t the metric. Carrel chose this style so he could collect information on how people play at this level, and after 2-3 hours figured out how to use his exploitive strategy to more significant effect.

The greatest takeaway I had from Carrel’s Day 1 recap, was this:

“You have to be in the mindset of trying to figure things out.”

I’ve been the man logging on to play poker with the sole focus of winning. What Carrel is talking about is shifting away from instant gratification, and instead creating a masterplan to crush the entire division.

It was also interesting to hear Carrel talk about his love for aggressive players.

“The best players in the world all went through a stage of being absolutely fucking mental.”

Carrel believes it’s easier to teach an animal to be selectively aggressive than it is to show a mouse to be aggressive at all. I also love his memory of Steve O’Dwyer‘s three-bet, triple barrel, punt, and then when asked why he made the play, he said, “I dunno, I wanted to win the pot.”

“That mindset is why he crushes the high rollers,” said Carrel. “His mindset is how to do I win this? Not, How do I get away from this?”

I think what Carrel is doing is fantastic. The poker world should be grateful that someone who once ran a $15 deposit on Stars into multi-millions is taking their time to show others how to do the same, and you don’t have to pay a penny to benefit.

He’s not the first person to take on such a challenge, the most famous being Chris “Jesus” Ferguson turning $0 into $10,000 during his Full Tilt heyday, and Doug Polk is currently attempting a similar channel across the pond.

Carrel has an openness and raw authenticity about him. I love how he takes poker concepts and applies them to life, so you get two lessons for the price of one.