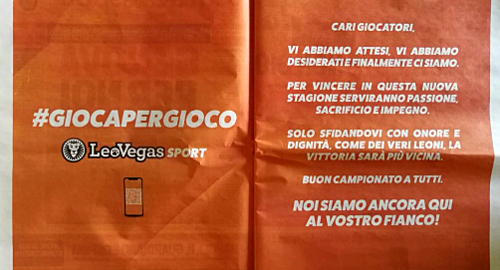 Mobile casino operator LeoVegas has launched an awareness campaign aimed at pushing back against Italy’s new ban on gambling advertising.

Dear players, we have waited for you, we have desired you and finally we are there. To win in this new season will require passion, sacrifice and commitment. Only by challenging you with honor and dignity, like true lions, victory will be near. Good championship everyone. We are still here by your side!

Italian gaming affiliate Jamma quoted LeoVegas CEO Niklas Lindahl saying the use of the word ‘dignity’ in the ad was no accident, referencing the new Italian government’s so-called Dignity Decree, which was approved this month, and includes a moratorium on all gambling advertising and sponsorships, effective January 1, 2019 (with existing sponsorships grandfathered until June 30).

Lindahl said the ad was intended to send the message that “advertising in the betting and gaming world can be responsible and correct.” LeoVegas wants to demonstrate that “we are different from what politics in recent months has tried to represent us.”

Lindahl has been among the ad ban’s loudest critics, verbally sparring with Deputy PM Luigi Di Maio and filing a legal challenge of the Decree with the European Commission. Lindahl told Italian affiliate Agimeg that the situation “will be resolved at the European level, or maybe when a new Italian government arrives that will reason in a more sensible way.”

Meanwhile, Russian bookmaker Marathonbet is making hay while the sun shines. Last month, it was reported that the bookies had signed a €7m shirt sponsorship deal with Serie A club SS Lazio, leading Di Maio to declare such deals ‘invalid’. On Friday, the bookmaker announced a new shirt deal that will only run through the end of this year.