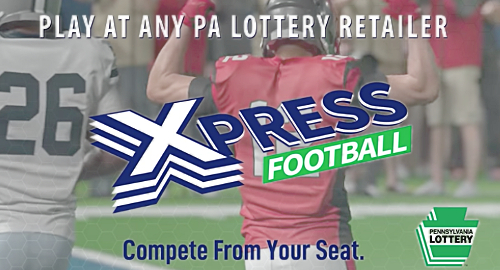 The Pennsylvania Lottery has added virtual sports to its product mix, while gaming regulators say actual sports betting won’t arrive in the state until October at the earliest.

On Wednesday, the Pennsylvania Lottery announced the launch of two Xpress Sports games: Xpress Football and Xpress Car Racing. Players can watch the animated action play out on big-screen monitors at over 1,500 Lottery retail outlets. New games run every five minutes and players can win up to $250 from a $1 stake.

Pennsylvania Gov. Tom Wolf announced last October that the Lottery would be adding virtual sports betting, a move that caught some observers by surprise. The product is being supplied by Inspired Gaming in conjunction with Scientific Games, which powers the Lottery’s platform.

Virtual betting is all the rage in Europe, particularly in Italy, where it generates about one-third the revenue of actual betting. Inspired launched online virtual betting in New Jersey last November, and it remains to be seen whether Pennsylvania’s new iLottery site will incorporate the new product.

Under the gambling expansion legislation Pennsylvania passed last year, the Lottery was forbidden from offering online products that “simulate casino-style games,” which would appear to give virtual betting a pass.

But Pennsylvania’s casino operators were already irate over the iLottery’s “slot-style” games, not to mention the Lottery’s ability to market its online products to anyone 18 years or older, while you’ll have to be 21 to visit the casinos’ gambling sites. So you can’t expect the casinos to take this latest affront lightly.

All three operators opted for the full-spectrum package (slots, table games and poker) rather than take the à la carte route and thus their $10m license fee must be submitted within 60 days.

The PGCB also revealed that Churchill Downs Inc, which recently acquired the Presque Isle Downs & Casino, has applied for online slots and table games licenses at a cost of $4m apiece.

Mohegan Gaming & Entertainment, which operates the Mohegan Sun Pocono casino, has applied for all three licenses, but delays in filing its application means it missed the volume discount deadline and must now pay $12m in order to offer all three products.

These latest applications leave only two of the state’s 13 casino licensees – Lady Luck Nemacolin and The Meadows – that have yet to file their online paperwork. That leaves a small handful of slots, table games and poker licenses up for grabs by out-of-state ‘qualified gaming entities’ who feel the Pennsylvania market is worth a flutter.

The PGCB has yet to set a date for when online gambling will officially commence, although it said Wednesday that it would aim for a “coordinated” launch once the first round of licenses had been issued.

SLOW-MO SPORTS BETTING
The PGCB also released its updated sports betting regulations, which include permission for betting operators to offer wagers on local college sports but sadly doesn’t include any relief from the state’s insane plan to tax operators’ revenue at a rate of 36%.

While operators have begun making noises about offering sports betting, the PGCB noted that it had yet to receive a single application for betting licenses. With nothing to vet and the PGCB’s next meeting not until September 12, the state most definitely won’t be offering legal wagering by the start of the upcoming NFL season.