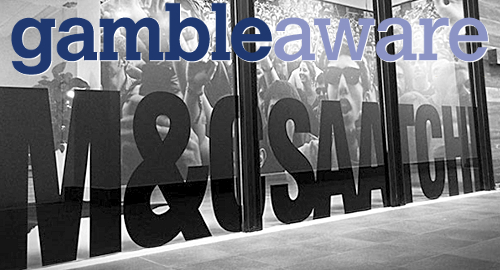 On Friday, GambleAware announced that it had appointed creative agency M&C Saatchi to handle its two-year, £7m responsible gambling advertising campaign, which will target ‘at risk’ gamblers to ensure they don’t progress (or regress) into full-blown problem gamblers.

GambleAware said it had selected M&C Saatchi following a competitive procurement process based on the agency’s previous experience in public health campaigns, the quality of their pitch, the depth of their analysis and the expertise of their team.

The charity has created a new board to oversee the campaign, and an advisory panel has been formed to solicit input from the gaming industry, the sports sector, problem gamblers, treatment providers, related charities and faith groups.

The charity’s existing communications agency Atlas Partners will design and deliver a complementary campaign to support M&C Saatchi’s efforts. GambleAware has also retained agency 18 Feet and Rising to handle “other ongoing advertising requirements” for its brand, independent of the charity’s work with Public Health England.

The Group launched its campaign in 2015 and independent research indicated that it had reached 82% of regular UK gamblers, of whom one-third — roughly 5m adults – confirmed that it had helped them gamble more responsibly.

In April of this year, Senet Group lifted certain copyright restrictions on the campaign for non-Senet members, thereby allowing its wider dissemination in the hopes of reaching even more gamblers.