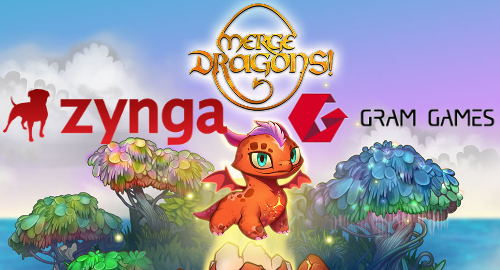 On Wednesday, Zynga announced it reached a deal to absorb Gram Games, which has 77 staff at two development studios in London and Istanbul. Zynga has agreed to pay $250m in cash plus a three-year earn-out based on the Gram team’s “achievement of profitability goals that align with Zynga’s long-term growth plans.”

Gram Games has found success within the hyper-Casual and Puzzle games segments, including the aforementioned Merge Dragons!, which made the Top 50 Grossing Games chart in the US Apple App Store following its release last year. Gram’s portfolio also includes the popular puzzle games 1010! and Six!

Gram Games co-founder Kaan Karamanci humble-bragged that his company had “helped define the hyper-Casual genre” and believed the marriage with Zynga’s live services expertise would help “grow our games and continue to delight millions of players around the world.”

Zynga said it didn’t expect any “significant” revenue impact from Gram Games in Q2 as the expected extra bookings (the in-game sale of virtual goods) of $10m will be classified as deferred revenue that will only be recognized in future quarters.

The markets reacted positively to Zynga’s announcement, pushing the company’s share price to $4.56 in mid-Friday trading from $4.19 at Tuesday’s close.

The Gram Games deal is the latest in a string of Zynga acquisitions, including last year’s $100m deal for Peak Games and the $42.5m purchase of Harpan Solitaire. The Peak Games deal also included an Istanbul-based studio that Zynga has transformed into its Casual Cards team’s HQ.

Zynga’s financial fortunes have undergone a significant turnaround of late, including setting new records for mobile engagement, which used to be Zynga’s Achilles heel.