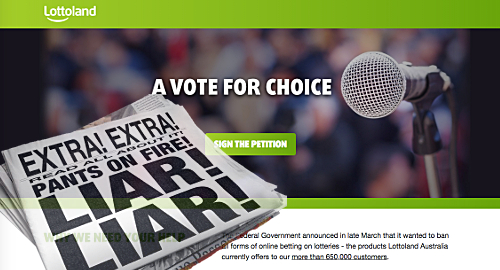 Lottery betting operator Lottoland is hoping to salvage its Australian operations by claiming its chief down under antagonist lied to the federal government.

On Tuesday, Lottoland’s Brill claimed that documents obtained from the Australian Securities and Investments Commission reveal that the ALNA’s parent company was “facing financial ruin” and had misled the government into thinking the ALNA “represented the views of 4,000 newsagents nationally,” when the group “has in fact only 707 paid members – about 80% less than claimed.”

Brill claims this revelation “raises major questions about the true intent of ALNA and whether it has misled not just the Government and other MPs, but whether it has also misled the public.” Brill claimed the ALNA had been “acting against the interests of newsagents by advocating for laws that would hand Tatts (now Tabcorp) an unprecedented monopoly,” and urged the feds to “put a stop to the planned legislation and start listening to newsagents on the ground.”

The ALNA responded with its own statement, slamming Lottoland’s claims as “adding another string to their ruthless bow of propaganda and deception,” while accusing Lottoland of having “twisted” the facts regarding the ANLA’s membership ranks.

The ALNA claimed that it is “solvent and represents approximately 2,000-member small businesses. Any rumors to the contrary are unequivocally false and salacious.” The ANLA says it has instructed its attorneys to “investigate all legal avenues” to punish Lottoland for “aggressively spreading defamatory rumors based on inaccurate and incomplete information.”

ALNA further claimed that documents it submitted to the government “point to there being over 4,000 small businesses operating as lottery retailers whose customers have been impacted and misled” by Lottoland. But the ALNA didn’t directly address Lottoland’s claim of it having only 707 paid members.

Last month, the Newsagents Association of New South Wales and the Australian Capital Territory (NANA) said it remained open to discussing some form of revenue sharing with Lottoland for every bet they refer to the online betting firm. NANA expressed concerns about a Tatts/Tabcorp lottery monopoly having “enormous consequences for the news agents.”