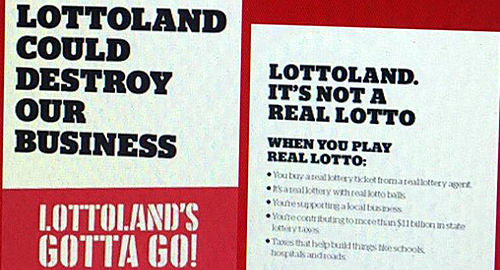 On Monday, the Herald Sun reported that three Australian state governments – Victoria, Western Australian and Queensland – were considering imposing new regulatory curbs on Lottoland’s business model, in which players wager on the outcome of local and international lottery draws.

South Australia’s Independent Gambling Authority has already prohibited Lottoland from conducting business in the state, based on the regulator’s view that Lottoland is cannibalizing local lottery sales without remitting the same amount of revenue in taxes and contributions to social and community causes.

Lottoland was issued an online betting license by Australia’s Northern Territory in January 2016. The Australian Lottery and Newsagents Association (ALNA) soon mounted a campaign encouraging the federal government to impose a nationwide ban.

This weekend, the ALNA upped the ante, announcing that lottery operator Tatts Group had launched a Lottoland’s Gotta Go! campaign to ban “fake lotto betting.” Tatts is providing retailers with a variety of point-of-sale display products, including posters (pictured) warning customers that “Lottoland could destroy our business” and that “Lottoland does not support local schools, hospitals or roads.” There are also commercial spots (viewable below) featuring lottery retailers attesting to their value to the community.

Lottoland’s UK operations are under similar attack by National Lottery operator Camelot, who has blamed falling sales on Lottoland’s ‘disruptive’ business model. In March, the UK government announced the launch of an open consultation into whether lottery betting ran “contrary to the spirit and intention” of local lottery rules. In June, UK regulators fined Lottoland £150k for failing to adequately explain to customers the nature of its business model.