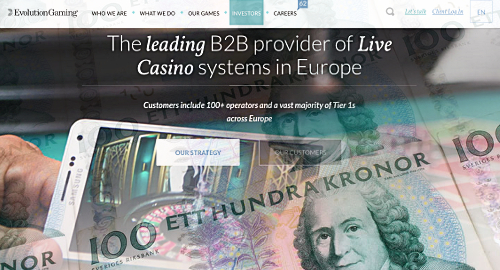 Figures released Thursday by the Stockholm-listed Evolution show revenue of €51.6m in the three months ending March 31, a 30% year-on-year improvement and nearly €1m higher than the company reported in its Q4 2017 scorecard. Earnings were up 29% to €22m on an ungodly margin of 42.6% while profit rose 30% to €16.5m. Evolution’s shares rose more than one-quarter on the news.

The end users of Evolution’s products placed 3.1b bet spots in Q1, up from just 2b in the same period last year, thanks to new customer launches and existing customers expanding their live casino offering.

Evolution CEO Martin Carlesund said Q1 had closed off stronger than it started, putting the company on track to at least match its 2017 profitability as the current year progresses.

Carlesund says there has been “notably higher interest” in Evolution’s products in Asian markets, which he says will “become another growth driver” and help Evolution continue to poach market share from its competitors.

The quarter saw Evolution launch several new products, including Lightning Roulette and RNG Roulette; the former product has been “widely appreciated by users” during its beta period, while Evolution has high hopes for the RNG product, “despite the niche comprising a smaller share of the market.”

Since the quarter ended, Evolution launched its new live dealer studio in Tbilisi, Georgia, the company’s ninth studio and “the most advanced we have built to date.” Carlesund claims the venue “has the capacity to accommodate our growth for the next two to three years.”

Evolution launched its first studio outside Europe in February, providing the British Columbia Lottery Corporation’s PlayNow.com site with ten tables offering five casino games. PlayNow is only accessible within the province, which has a population of just 4.6m, but Carlesund claims the new offering has enjoyed “a strong start” despite this limitation.