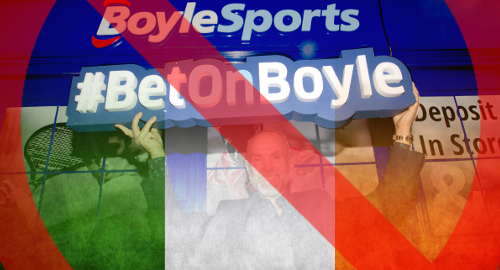 On Saturday, the Gaelic Athletic Association (GAA) held its annual congress at Dublin’s Croke Park, at which 93% of the 270 voting delegates voted to ban “sponsorship by a betting company of any competition, team, playing gear or facility.”

The congress also voted (by a slightly smaller margin) to prohibit the brand of any sponsor – gambling or otherwise – from being “allowed on clothing and gear of match officials.”

No inter-country GAA teams have betting sponsorships at present, but Armagh football has a deal with Irish bookmakers Boylesports and All-Ireland club champs Crossmaglen Rangers are sponsored by Bar One Racing. Both deals will expire at the end of their current terms.

One delegate claimed the betting sponsorship ban was necessary to “enhance the moral standing of the GAA in Irish life and protect the integrity of our games.” Quite how this ban will accomplish this lofty goal went unstated, and seems unnecessary, given that the GAA already prohibits players and officials from betting on games in which they’re involved.

Gaelic Players Association (GPA) spokesman Alan Kerins spoke in favor of the ban, claiming that 50% of the 77 players who sought the GPA’s counselling services last year did so due to gambling-related issues. Again, it’s unclear quite how this ban might impede any player’s ability to access gambling services in future.

And the urge to prohibit appears to be as addictive as the gambling these delegates so despise. Saturday’s congress saw GAA delegate Jack Devaney urge his fellow delegates to prohibit alcohol companies’ ability to establish business relationships with GAA entities.

There’s a move afoot to purge gambling from the world of sports, as witnessed by last year’s decision by the English Football Association to scrap all sponsorship deals with bookmakers, including its £4m per year league sponsorship deal with Ladbrokes, which was only one year into a four-year term.

The UK Labour Party has pledged to prohibit gambling companies from inking any football shirt sponsorships if voters return the party to power. But it’s worth noting that, despite all this gambling exposure, the UK’s number of problem gamblers remains on par with other major markets that don’t offer betting firms anywhere near the public exposure the UK allows, suggesting that betting’s visiblity has little to do with individuals who have difficulty putting limits on their gambling activity.