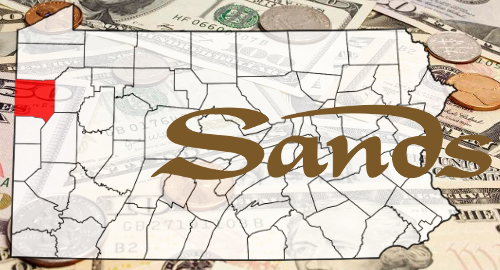 As a result, the Board will reconvene on Thursday to “consider the award … to the second and only other bidder, Greenwood Gaming and Entertainment, Inc,” which owns the state’s market-leading Parx Casino. The original article continues below.

On Wednesday, Sands submitted the winning $9.9m bid that won the Pennsylvania Gaming Control Board’s fourth auction for the new Category 4 licenses. Sands has elected to build its new mini-casino in Mercer County close to the Ohio border.

Sands operates the state’s number two casino Sands Bethlehem, which has been the subject of acquisition talk over the past year or so. It remains to be seen whether the Cat 4 license pursuit reflects the company’s intention to stay in Pennsylvania or whether it’s simply bulking up its local presence to make Sands Bethlehem a more alluring takeover target.

Sands Bethlehem president Brian Carr did his best to convey the former impression, saying Pennsylvania “remains a great gaming market and we believe some parts of the state are actually underserved.” Carr promised to offer further details on the company’s Cat 4 property in due course.

The state is offering up to 10 satellite casino licenses as part of the state’s 2017 approval of gambling expansion legislation. The Cat 4 venues can offer up to 750 slot machines, plus up to 30 gaming tables for an additional license fee of $2.5m.

The state has so far generated over $121m from the Cat 4 auctions, although the returns continue to diminish with each successive auction. The first license cost Penn National Gaming (PNG) $50.1m, while Stadium Gaming LLP paid $40.1m two weeks later, while the third license cost Mount Airy Casino Resort just $21.2m earlier this month. Sands’ $9.9m bid was only marginally higher than the $7.5m reserve price.

The whole Cat 4 program faces a threat from a lawsuit filed by PNG, which claims that the legislation is unconstitutional because it places an undue competitive burden on PNG’s Hollywood Casino at Penn National Race Course. PNG claims it stands to lose $34m in annual revenue from the Cat 4 competition, but the state claims PNG has failed to demonstrate that it has been “intentionally treated differently than other casinos”