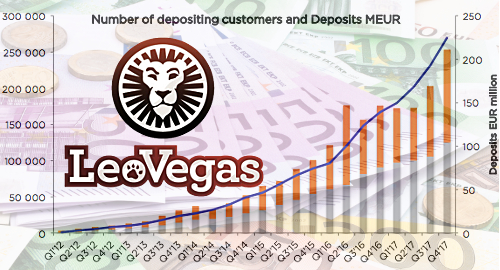 Swedish mobile casino operator LeoVegas boosted its Q4 revenue by two-thirds while positioning itself for entry into a regulated German online gambling market.

On Wednesday, LeoVegas reported revenue rising nearly two-thirds to €67.8m in the three months ending December 31, although earnings fell 39% to €6.1m and operating profit dipped 78% to €2.1m, which the company blamed on costs associated with its October acquisition of UK-facing online casino operator Royal Panda.

LeoVegas CEO Gustaf Hagman hailed the Q4 results as “one of our best quarters ever, with very strong underlying growth” of 82%, while the number of new depositing customers was up 50% to a record 128,409.

LeoVegas made another big online casino acquisition in January through a £65m deal for Intellectual Property & Software Limited (IPS). LeoVegas has rechristened IPS and its related assets under the banner of Rocket X, and had both Royal Panda and Rocket X fully contributed to Q4’s results, revenue would have hit €84m.

Hagman said the company was working hard to bolster its sports betting product ahead of this year’s FIFA World Cup – although he loses points for calling it the ‘UEFA World Cup’ – including boosting LeoVegas’ live streaming offering in Nordic markets.

LeoVegas launched a Canadian free-play site during the quarter with former Toronto Maple Leafs captain Mats Sundin as its brand ambassador, which the company hopes will provide “good marketing opportunities.”

Wedesday also brought word that LeoVegas was making moves to shore up its German market position through the £2.6m acquisition of Malta-based World of Sportsbetting Ltd, which operates the HappyBet brand and holds online sports betting and casino licenses in the German state of Schleswig-Holstein and has an approved application for a sports betting license in the state of Hesse, under the (now defunct) Interstate Treaty on Gambling.

Hagman said the new German licenses would provide LeoVegas with “increased credibility when we collaborate with, for example, media partners, which is important in order to get full effect on our market investments.”