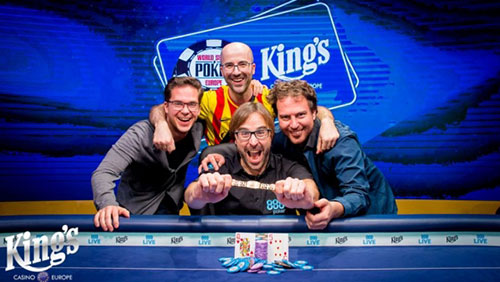 A Catalonian has won the World Series of Poker Europe Main Event and at the same time parlayed a €220 investment into €1.1m beating a final table including the likes of Jack Salter, Maria Ho, and Niall Farrell.

In 2016, Spaniard Fernando Pons qualified for the World Series of Poker (WSOP) Main Event playing in a €30 satellite on 888Poker.es, and parlayed it into a cool million for finishing ninth.

The event attracted 529 entrants, making it the second largest WSOPE Main Event of all time (2011 attracted 593 entrants, and Elio Fox won €1.4m). Some of the best players in the game gravitated to the final table, with the reigning champion, Kevin MacPhee falling just shy, exiting in tenth place.

Sam Trickett and Stephen Chidwick are the only Englishmen to have earned more money playing live multi-table tournaments (MTTs) than Jack Salter. Salter, who cashed in 19th place in the One Drop High Roller, finished seventh in this one.

Maria Ho was trying to become the first female to win a WSOP Main Event. So often thrusting the microphone in finalists faces in her role as a sideline reporter, Ho got a chance to experience life on the other side and finished sixth.

And Niall Farrell continued his tremendous year by finishing fifth. Farrell won the €25k High Roller for €745,287 to complete the coveted Triple Crown, and overtake David Vamplew as the most successful live MTT money earner in Scottish history.

The heads-up action would come down to a brawl between the inexperienced Spaniard and the experienced live grinder Gianluca Speranza. The Italian finished second to Andrew Hinrichsen in a 2011 WSOPE bracelet event, and would once again take the role of bridesmaid after losing out to the 888Poker qualifier in four hours of tough and tense action.

De Torres, who quit a profession as an economics teacher in 2015 to try and achieve his dream of playing poker professionally, becomes the first person from Catalonia to win a WSOP bracelet, quite apt when you consider the depth of feeling on Catalan independence in Barcelona in recent days.

And De Torres needs the money.

His partner is expecting their second child.

Other notables who went deeper than a Moray Eel were Kristen Bicknell (18th), Rainer Kempe (22nd), and Anthony Zinno (24th).