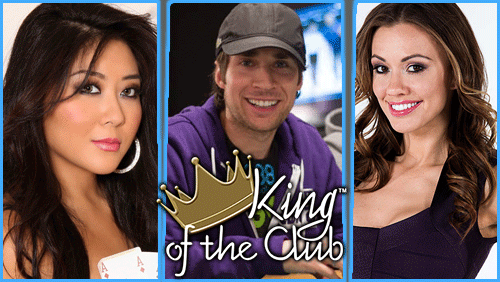 The World Poker Tour turns to the trifecta of Maria Ho, Jeff Gross, and Caitlyn Howe to make their latest TV show, ClubWPT™ King of the Club, a huge success, as the free-to-play social poker site opens the doorway to superstardom.

For US-based poker lovers dreaming of turning their hobby into a career, the once glistening tributaries leading to an oasis of online poker have dried up to ash and bone.

The fish flip and flop, gasping for breath; a game that is every bit as American as patriotism, baseball caps, and egg-shaped footballs, dying on its ass, strangled by the red tape of bureaucracy.

But there is a sliver of a stream still teaming with life, and it won’t be long before it’s chocked full of people with dreams of the big time sewn into their DNA.

ClubWPT™ is the online poker arm of the World Poker Tour (WPT). As the world left the 9 to 5 to head to the bars looking for an escape from life, the baddest poker TV show on the planet announced plans to launch a second TV show based on the free-to-play social online poker room.

ClubWPT™ King of the Club is an event that gives gas fitters, pastry chefs, and fisherman the chance of qualifying online for a seat in a one-of-a-kind televised WPT event.

The shows feature two tables of eight online qualifiers with a shot of winning $37,000 in cash and prizes, including the winner taking a seat in a $10,000 buy-in WPT Main Event, and the WPT have hired some serious heavyweights to bolster the show from the sidelines.

The co-commentary team for the event will be Maria Ho and Jeff Gross, Royal Flush Crew member, Caitlyn Howe, acts as the anchor. WPT President, Adam Pliska, told the press of his excitement for the forthcoming show, talking up the experience that both Ho and Gross bring to the table, as well as emphasising the WPT’s habit of promoting within when it comes to the role of Howe as the anchor.

Ho is one of the hardest working poker players in the business. Poker fans recently saw her play a pivotal role in the coverage of the World Series of Poker (WSOP) Main Event, Poker Central’s Super High Roller Bowl (SHRB), and more recently the Seminole Hard Rock Poker Open (SHRPO).

Gross is on a roll thanks to the success of his PokerFlowShow on Twitch. In 2016, he signed a deal to represent 888Poker at the WSOP, and earlier this year became a member of the coveted PokerStars Team Pro.