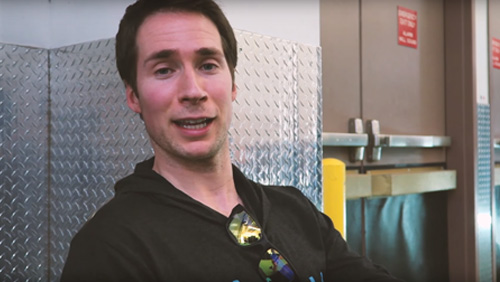 The 30-year-old from Ann Arbor, Michigan, was unveiled ahead of the World Series of Poker (WSOP) Main Event Day 1c, where Gross will wear a PokerStars patch for the first time.

The signing is another clear indication that the blueprint of the sponsored professional poker player contains a need to have access to a ready-made audience.

Gross is one of the most successful Twitch streamers in poker, with over 29k followers, and 1.69m views on his Poker Flow Show. He also began a VLOG on YouTube at the start of the WSOP.

It’s the first time Gross has worked with PokerStars in an official capacity, but he has collaborated with PokerStars employees Jaime Staples and Kevin Martin in a 24/7 Twitch stream marathon and on board Bill Perkin’s StreamBoat.

Gross, who has earned over $1m playing online and $3m playing live, will compete on PokerStars.com as ‘Jeff Gross’ and ‘Jeff Gross NJ’ when appearing in PokerStars online games in New Jersey.

And, remember, you heard it here first.

Jeff Gross is the type of guy who has people like Michael Phelps popping over to a run of the mill Saturday afternoon barbeque, and I believe this relationship will lead to Phelps joining PokerStars in the very near future.

Moving swiftly on from one heroic Olympian to the next, and PokerStars will leverage their relationship with Usain Bolt by sponsoring the IAAF Monaco Diamond League 100m Race at the end of the month.

The race takes place July 21 at the Stade Louis II Stadium and will be Bolt’s penultimate race ahead of his final competitive race at the IAAF World Championships in London 4-13 August 2017.

PokerStars MEGASTACK to Debut in New Jersey in October

PokerStars is taking the MEGASTACK brand to New Jersey.

The $220 buy-in event, where you begin with 50,000 chips, will carry the name Sunday Special Live, keeping a connection with the PokerStars NJ Sunday Major of the same name. The event will run October 6-8, will give a $100k guarantee, and the Resorts Casino Hotel will handle the chips, decks, and cups of coffee.

The MEGASTACK brand launched in London’s Hippodrome Casino, in April, and the American Sheryl Gershon defeated 526 entrants to win the £11,536 first prize.If you are interested in competing in an MEGASTACK event, then you can catch them in England, Ireland, Spain, Belgium, or Malta.