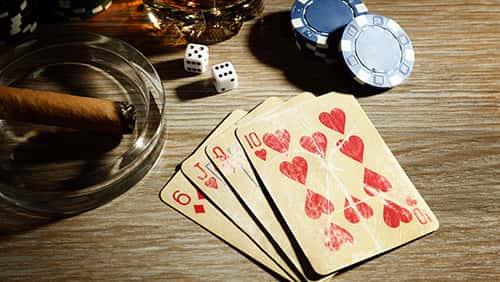 With Day 2 in the can with just three dozen players left in the hunt for the million-euro top prize, plenty of big names are still flying high in the hunt for one of the most eagerly-sought WSOP bracelet of the year.

Julien Martini led for much of Day 2, while the WSOP Main Event runner-up, Dario Sammartino, has shown just how little of a fluke his summer performance was, racking up over three million chips himself. In fact, there are numerous big names still in with a chance of success. Anton Morgenstern sits ominously in the top ten. Tournament legend Anthony Zinno is just a few raise-and-takes behind the chip leader. In fact, the one absence that leaps out from the list is not of big names, but of a big, powerful poker nation.

With 100 players remaining in the WSOP Europe Main Event, just three were British. Harry Ross is still involved, and has a top 10 stack to his name. Former WPT and EPT winner Roberto Romanello still has a shot at the Triple Crown, too, and both would be superb British winners. But the only other British player in top 100, former champion Jack Sinclair, is out.

Those three players aren’t the problem, indeed nor are the players who made it from Britain to the Czech/German border. The problem doesn’t appear to be an individual one, as British players are some of the best to ever play the game and are arguably the best playing the game right now in terms of cash game crusher Sam Trickett and tournament wizard Stephen Chidwick.

But why aren’t dozens of British players making the final knockings of major tournament such as the World Series of Poker Europe? There was definitely a time when “The Brits are coming” referred to the poker players taking the world by storm. Jake Cody was winning a Triple Crown in the time it took other players to learn how to three-bet. Victoria Coren-Mitchell was mopping up her second EPT Main Event, becoming the only player to do so.

There just seemed more enthusiasm about British players travelling en masse to take on the biggest events in the world. It’s many years since Britain last had a player at the final table of the World Series of Poker Main Event in Las Vegas. The split on betting apps for how many Brits will win bracelets is usually around the 3 or 4 mark. That’s shockingly low for the level of talent British players possess.

The land of Late Night Poker, the Devilfish, the Hit Squad, the Hendon Mob and Sam Grafton, Toby Lewis, Sam Razavi, Neil Channing, Barny Boatman and dozens of other superb poker players deserves to have more players running deep in events such as the WSOPE Main Event, but poker never respected what was deserved.

The cards don’t care, as the saying goes.

So, it’s the numbers then. It’s the sheer number of players who never even considered getting on a plane, turning up at King’s Casino and laying down a stack of Euro bills on the line in order to take their shot at glory.

It can’t be the venue, because King’s Resort is a place quite literally built for poker. Whether there is much of a party scene outside the gilded cage that is King’s is another matter. But should poker players need a fabulous location to persuade them to battle for the biggest prizes in the game? Poker used to be played in darker rooms, with less bright lights than a B-road at 4:00 am and the proportion of British players seemed to be higher.

With the World Series of Poker Europe deciding the Player of the Year, no British players are anywhere near threatening the upper echelons of the leaderboard. They are miles off, but it’s not only Americans who are in contention as Aussie Robert Campbell has proved, running so near the top and winning two bracelets along the way.

Are the Brits coming any more or have they simply gone away as a collective, happy to sit alongside other less-populated European nations? Time will tell. But if the final 100 players in the World Series of Poker Europe Main Event is anything to go by, Britain could do with a new Lord Kitchener poster telling them that their country needs them to go into battle.

What would the Devilfish say? He’s loudly curse, grab his guitar and laugh at there being less players he knows how to beat on the way to taking it down himself. But then, to his credit, he could always be relied on to turn up.

Billy Chattaway on getting so close to WSOPE Gold
Paul Seaton
23 October 2019
.