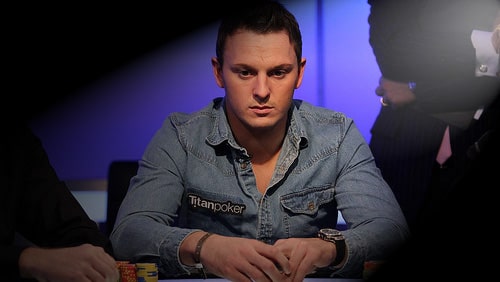 One of the most preciously sought WSOPE bracelets of the Series so far saw British poker legend Sam Trickett denied his first-ever bracelet by Australian player Kahle Burns as Event #8, the €25,500-entry Platinum High Roller at King’s Casino ended with the Antipodean fans celebrating a bracelet win and €596,883 going to their man.

To paraphrase Oscar Wilde, to come second in a bracelet event once might be unlucky, but to do it twice has to be seen as something of a tragedy, and that cross must be borne by Britain’s Sam Trickett today.

Having finished as runner-up to Antonio Esfandiari in 2012’s Big One for One Drop, Trickett added another €368,899 to his amazing career score of $21 million in live tournament earnings but will feel gutted to have come so close and not sealed the victory his lifetime in the game deserves.

Speaking of almost, it was very nearly a second bracelet this summer for then German player Hossein Ensan, who won the WSOP Main Event just three short months ago.

Entering the final day’s play with the chip lead, Burns would eventually carry that to the win, but a lot happened between the first card being dealt and the final, fateful deal declaring the Australian the winner.

With just six players left on the final day, the fans who had gathered to watch the final table having already seen Robert Campbell bust in 8th place for €59,189 (and perhaps more pricelessly, hundreds of POTY points) and Anton Morgenstern in 7th place for €74,117.

With half a dozen players remaining, GPI powerhouse Alex Foxen was first to depart when his move with queen-jack was unlucky to run into Trickett’s ace-jack, with the British player dominating his opponent into the dust to force out one of the most dangerous players at the table.

It was a stacked final table, though, and every player was in great form. Timothy Adams, who busted in fifth place, would lose to Trickett too, losing a coinflip with ace-king against ‘Tricky’, who had pocket eights and held.

It could have been three eliminations in a row, but perhaps in a pre-emptive hand of the luck Trickett would see abandon him heads-up, he couldn’t hold with pocket aces as the nine-eight of Hakim Zoufri managed to make a straight.

Two big all-ins followed, Trickett bumping himself up the order and finally vanquishing Zoufri, before Burns catapulted him into the lead. Winning with ace-ten against Hossein Ensan’s king-queen, Ensan couldn’t hit and would not survive the count-up.

Down to two, it was a single hand that changed the course of the contest, with 98% of the chips in play as Sam Trickett shoved over a re-raise with ace-queen and was called by Burns, who held pocket queens. They held and Burns held the bracelet, with Trickett the bridesmaid for a second time.

With the WSOP Europe Main Event still to come, Trickett will be thinking that three times could yet be the charm.