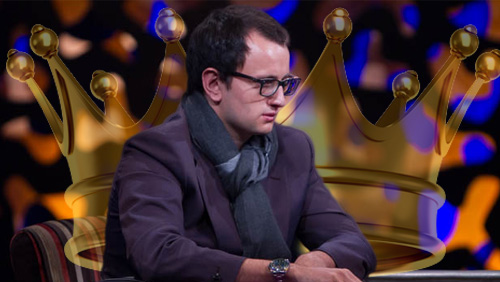 Hidden in the middle of Season XV of the World Poker Tour (WPT) like the creamy goodness inside a Creme Egg is the WPT California Swing contest.

Players who competed in the triumvirate of California events held back-to-back between Feb 25 – March 15 qualified for the contest. The events in question were as follows:

The winner is one of the top performing High Rollers of recent years, Rainer Kempe. The young German topped the leaderboard by finishing 18th in the LA Poker Classic for $53,760 and making the final table of the Shooting Stars event where he finished in sixth spot for $188,460.

Kempe didn’t cash in the WPT Rolling Thunder event, but he did win the $50,000 Super High Roller at the Aria in between his two cashes in the California Swing qualifying events.

It’s been a good start to the year for Kempe who has so far won a million bucks playing live tournament poker including a third place finish behind Erik Seidel and Daniel Colman in the HK$250,000 buy-in No-Limit Hold’em Six-Max event as part of the Triton Super Series in Manila where he earned $188,904.

For topping the leaderboard, Kempe receives up to six night’s accommodation during the LA Poker Classic Main Event at the Commerce Casino’s Crowne Plaza Hotel. Complimentary transport from either LAX or Burbank to/from the Commerce.

Kempe will also be a Shooting Star at the 2018 Bay 101 event and will receive $1,000 towards his accommodation.

Kempe is the reigning Super High Roller Bowl champion after beating Fedor Holz to take the $5m prize last year and is in the field looking to defend that title when the action begins at The Aria May 28 – 31.