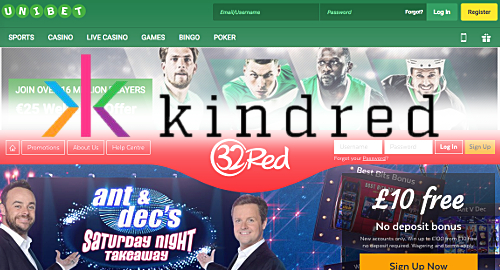 On Friday, the parent company of Unibet reported revenue hitting a record £193.6m in the three months ending September 30, 36% higher than the same period last year, while earnings rose 38% to £46.8m (also a record) and pre-tax profit spiked 41% to £35m.

The revenue surge was spurred by this spring’s addition of the UK-facing 32Red online casino brand, which contributed revenue of £18.6m and earnings of £3.7m to the Q3 totals. Kindred controls around a dozen different gambling brands, although the Stan James Online brand was recently put on death row.

Even more impressive, the Q3 gains came despite Kindred issuing its largest ever slots payday in late September, when a Unibet Belgium customer collected over €7.7m via the pooled Mega Moolah Jackpot.

Kindred likes to celebrate its poker product as “the fastest growing licensed poker network in the industry,” but the vertical posted both year-on-year and sequential revenue declines in Q3. Kindred’s poker business earned £3m in Q3, down from £3.2m one year ago and from £3.9m in Q2 2017. However, for the year-to-date, poker revenue is up nearly 18%.

Trading to date in the first three weeks of October has seen daily average revenue 68% higher than the same period last year, based on “approximately 50% higher than normal sports book margins.” Even factoring out contributions from 32Red and currency fluctuations, growth was still an impressive 57%.