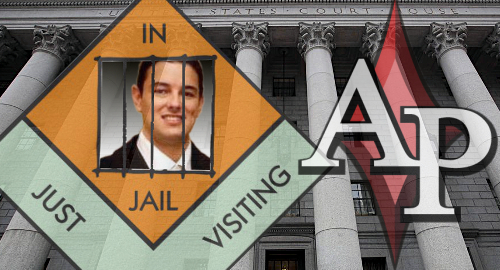 Absolute Poker co-founder Scott Tom has returned to his home in Antigua after serving a week in a United States jail on illegal gambling charges.

Tom, who faced multiple felony charges after being indicted on April 15, 2011 aka Black Friday, reached a plea deal with US prosecutors on May 31 in which he agreed to plead guilty to a single count of being an accessory after the fact in the transmission of gambling information (a misdemeanor).

As part of his plea deal, Tom agreed to forfeit $300k and was released on bail ahead of his sentencing on September 28. Under the advisory Sentencing Guidelines, Tom was eligible for a sentence of probation.

At the sentencing, Tom’s lawyer James Henderson requested that Tom be sentenced to time served, and the prosecutor did not expressly request that Tom serve a custodial sentence.

However, US Magistrate Judge Barbara C. Moses apparently went a bit ‘rogue,’ ordering Tom to spend seven days behind bars before he was allowed to leave the United States. Moses reportedly didn’t feel that Tom had actually served any time in jail during the booking process so a sentence of ‘time served’ wasn’t appropriate.

Challenged on this point by Moses, Henderson told the judge about similar cases where a time-served sentence had been imposed, but he couldn’t provide any specific legal authority to support the proposition that the booking process constituted ‘time served’ in jail.

Tom apparently expected a different outcome because he had already purchased a non-refundable airline ticket to return to Antigua on September 30. An unimpressed Moses called this purchase “a bold move” before informing Tom that he wouldn’t be making that particular flight.

The 40-minute hearing didn’t go entirely against Tom, as Moses spared Tom the requirement of supervised release, meaning that upon completion of his seven-day sentence, Tom would have no continuing obligations other than payment of the $300k forfeiture.

The hearing was also notable for the lack of any discussion whatsoever of Tom’s role in the Absolute Poker ‘superuser’ scandal, or that Tom’s customers were left high and dry when AP and its sister site Ultimate Bet collapsed in disgrace shortly after Black Friday.

It was only this August that around 7,400 former AP/UB customers learned they would receive a total of $33.5m in remissions payments from funds left over from the $731m settlement PokerStars made with US prosecutors to resolve its own Black Friday legal issues.

The resolution of Tom’s US legal problems leaves former PokerStars owner Isai Scheinberg as the only one of the 11 individuals indicted on Black Friday to have yet to reach some kind of accord with US prosecutors.

The World Trade Organization has declared America’s prosecutions of internationally licensed online gambling operators to be in violation of its international trade obligations. However, while AP did have an Antiguan license, much of its operations were based in Costa Rica and thus lay outside the scope of the WTO rulings.

It also didn’t help Tom’s case that he was a US citizen who only took up residence in Antigua after Black Friday, and thus had no personal connection to Antigua during the time in which he committed the activities for which he was charged.