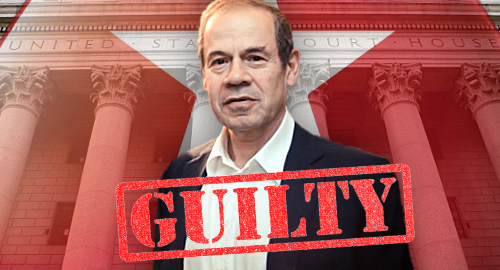 PokerStars founder Isai Scheinberg has pled guilty to illegal gambling in a New York court, setting up the end of the nearly decade-long Black Friday saga.

On Wednesday, Geoffrey Berman, US Attorney for the Southern District of New York, announced that Scheinberg had entered a plea of guilty to a single count of operating an illegal gambling business. Scheinberg faces a maximum sentence of five years in prison when he’s sentenced later by US District Judge Lewis Kaplan at a later date.

In January, news broke that the 73-year-old Scheinberg had surrendered to US authorities after being arrested in Switzerland last June. Scheinberg initially chose to fight extradition before agreeing to come to New York to face the music.

Scheinberg’s plea comes nearly nine years after he was indicted on federal charges of illegal gambling, bank fraud and money laundering related to the April 15, 2011 online poker crackdown by US authorities. Scheinberg told the court that he knew PokerStars was operating in defiance of US law but opted to continue operating his insanely profitable business (for some unstated and inexplicable reason).

PokerStars was one of four companies targeted on Black Friday and the only one to survive the financial fallout. While Full Tilt Poker, Absolute Poker and Ultimate Bet all imploded after essentially being exposed as Ponzi schemes, Stars not only promptly refunded its customers’ account balances, it also provided funds that helped bail out Full Tilt and AP customers.

AP co-founder Scott Tom reached his own deal with prosecutors nearly three years ago, which made Scheinberg the last of the 11 individuals indicted on Black Friday who’d yet to resolve his charges. While Scheinberg technically faces five years in stripes, few observers believe he would have given up the extradition fight without having worked out far more favorable terms.

Berman said Wednesday that Scheinberg’s plea proved that “the passage of time will not undermine this Office’s commitment to holding accountable individuals who violate US law.” That is, unless you perpetrate a massive mortgage-backed securities fraud that crashes the global economy, in which case you get handed billions of taxpayer dollars and some stern finger-wagging.

Scheinberg and his son Mark – who resolved his Black Friday civil charges in 2013 – sold PokerStars’ parent company in 2014 for $4.9b to Canada’s Amaya Gaming (since rebranded as The Stars Group). The PokerStars brand made its official US regulated market debut in 2016.