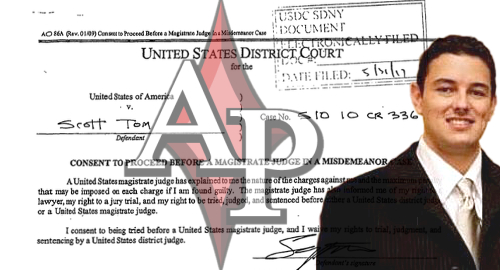 On May 31, Tom (pictured) reached a deal with federal prosecutors to plead guilty to a single misdemeanor charge in connection with Absolute Poker’s US-facing operations in the years prior to the April 15, 2011 indictments issued by the US Attorney for the Southern District of New York.

Tom, who returned to US shores in February nearly six years after being indicted, originally faced multiple felony charges of illegal gambling and conspiracy to commit money laundering.

According to documents filed with the US District Court for the Southern District of New York, Tom agreed to plead guilty to a single misdemeanor count of being an accessory after the fact to the transmission of wagering information. Tom waived his right to a jury trial and consented to proceed to trial, judgment and sentencing by US Magistrate Judge Barbara C. Moses.

Tom will be sentenced on September 28, 2017 at 10am. The maximum sentence for violating Title 18, US Code Section 1084 is two years in prison. Tom has also agreed to forfeit “any and all property” derived from the commission of his illegal activity.

Absolute Poker was one of three online poker sites indicted on Black Friday, along with Full Tilt Poker and PokerStars. Both Absolute Poker and Full Tilt collapsed after US officials seized their bank accounts and the companies were exposed as not having sufficient funds on hand to refund their players’ deposits.

By contrast, PokerStars immediately made its players whole, and subsequently reached a $731m deal with federal prosecutors to both resolve its civil charges and acquire the assets of Full Tilt. In April, the Department of Justice announced that there were sufficient funds left over from the Full Tilt remissions process to permit a “compensation program” for “eligible victims of a fraud committed by Absolute Poker.”

Scott Tom’s partner in crime at Absolute Poker, Brent Beckley, was sentenced to 14 months in prison after pleading guilty in 2012 to conspiring to commit bank and wire fraud. The surprisingly mild resolution of Tom’s case leaves PokerStars founder Isai Scheinberg as the only one of the 11 individuals indicted on Black Friday to have yet to resolve his legal differences with the DOJ.