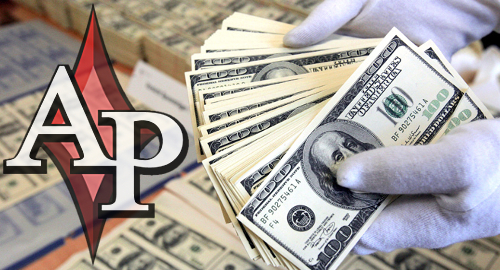 Absolute Poker co-founder Scott Tom has agreed to forfeit $300k as part of his Black Friday plea deal with US federal prosecutors.

In February, Scott Tom returned to US shores to face multiple felony charges filed nearly six years earlier by the US Attorney’s Office for the Southern District of New York as part of the April 15, 2011 ‘Black Friday’ online poker indictments of Absolute Poker, Full Tilt Poker and PokerStars.

On May 31, Tom reached a deal with prosecutors that saw him plead guilty to a single misdemeanor of being an accessory after the fact in the transmission of gambling information. Tom is scheduled to be sentenced on September 28 by US Magistrate Judge Barbara C. Moses.

Documents viewed by CalvinAyre.com indicate that Tom’s plea deal requires him to forfeit $300k, “representing the amount of proceeds traceable to the offense” to which Tom pled guilty. The charge encompassed Tom’s illegal gambling activity between October 2007 and “in or about 2009.”

Tom’s misdemeanor calls for a maximum term of imprisonment of one year followed by another year of supervised probation. However, the plea agreement allows for a “two-level reduction” in the base offense level of Tom’s crimes if his allocution and subsequent conduct prior to sentencing demonstrates his “acceptance of responsibility” for his actions.

This two-level reduction lowers his potential prison time to between zero and six months, while the allowable fine range is between $250 and $5k. While Judge Moses isn’t bound by these guidelines, scuttlebutt has it that Tom – who has been out on bail pending his sentencing – will likely be spared a custodial sentence.

Exposed as lacking the money to immediately refund its US players’ account balances, Absolute Poker and its sister site Ultimate Bet collapsed in disgrace following Black Friday, as did rival Full Tilt. PokerStars carried on more or less as normal after striking a $731m deal with prosecutors that eventually led to (most) US players of both Absolute and Tilt being reunited with their account balances.

The fact that Absolute’s US players ultimately received their due doesn’t excuse the cowboy capitalism practiced by Tom and the company’s other top execs before the collapse. Tom has also never faced a reckoning over his role in the AP/UB ‘superuser’ scandals, in which he and other company principals cheated their own players out of millions of dollars.

That said, CalvinAyre.com empathizes with any online gambling operator caught up in America’s hypocritical war against internationally licensed gambling sites, particularly those based in Antigua, which successfully challenged America’s hypocrisy at the World Trade Organization yet has never received so much as an acknowledgement of wrongdoing on behalf of the US government.

As such, we begrudgingly congratulate Tom on the successful resolution of his long-running legal nightmare, although we understand that many former AP/UB players may not be in as forgiving a mood.