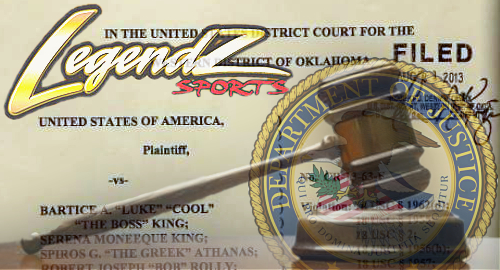 The former CEO of online sportsbook Legendz Sports has been spared jail time due to a judge’s belief that illegal sports betting is a victimless crime.

On Thursday, a federal judge in Oklahoma sentenced Bartice ‘Luke’ King to five years of probation, of which the first five months will be spent under house arrest at King’s home in Texas. King, who was convicted in 2015 on charges of illegal gambling and money laundering conspiracy, was also ordered to pay $12.6m in penalties.

In 2013, the Department of Justice and the US Attorney’s office for the Western District of Oklahoma indicted 34 individuals connected with the Panama-licensed Legendz operation. All of the other defendants have already been sentenced, and none of them ended up facing custodial sentences beyond Philip Guiran, who was sentenced to time served in April 2014.

King had been facing up to 41 months in stripes but US District Judge Stephen Friot declined to put King behind bars, in part due to Friot’s view that sports betting isn’t a detriment to society at large. During Thursday’s sentencing, Friot cited a jury foreman’s letter in the trial of two other Legendz defendants suggesting probation for the pair.

NewsOK quoted the letter saying the jury foreman saw “no threat to society” in granting the pair probation, based on “all the ‘legal’ sports gambling that goes on in the U.S., coupled with the fact that no one was physically harmed and nobody was forced to place bets.”

Judge Friot also slammed the DOJ for having engaged in “disheartening” conduct during both its investigation and prosecution of King’s case. Friot singled out DOJ attorney John Han, who was brought in from outside Oklahoma to assist the prosecution, for unprofessional conduct.

Friot said the government had “played fast and loose with the facts,” including their claim that Legendz handled $1b worth of wagers, a claim Friot called preposterous. However, Friot insisted that the DOJ’s misconduct didn’t play a role in his sentencing of King.

The two-year delay between King’s conviction and his sentencing was based on Friot’s need to determine the size of King’s financial penalty. The government had sought $222m in cash, along with three vehicles, five plots of land and numerous other material items.

Friot arrived at the $12.6m figure in March, after determining that the government had lied about Legendz being King’s sole source of income during the years it was in business.

Ironically, King’s sentence was issued one day before the Oklahoma state senate voted 22-16 against a bill that would have approved legal sports betting in the state should the federal government lift its longstanding prohibition against the activity. The US Supreme Court is currently considering whether to hear New Jersey’s appeal of lower court rulings shooting down the state’s efforts to overturn that federal prohibition.