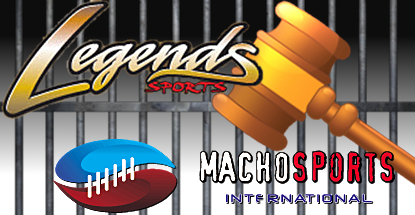 Bartice ‘Luke’ King was one of 34 individuals indicted in April 2013 by the US Department of Justice. The US Attorney for the Western District of Oklahoma charged King and the others with taking online and telephone wagers from US residents via operations based in Panama and Costa Rica. The indictment prompted Panamanian authorities to revoke Legends Sports’ online gambling license, after which the site’s customers were transferred to WagerWeb.

The 44-year-old King, who was released on $1m bail in August 2013, opted to fight the charges and his trial began two weeks ago in federal court in Oklahoma City. On Thursday, the jury found King guilty of conducting an illegal gambling business and engaging in a conspiracy to commit money laundering. A date for sentencing has yet to be set.

The US Attorney’s office said Legends had handled over $1b in wagers from US residents over its 10 years of operation. The site utilized local agents on the ground to settle up cash transactions. King used his share of the proceeds to purchase mansions in Florida and Texas, investments he will likely forfeit once sentencing is pronounced.

Other figures indicted in the same case have already learned their fates. In April 2014, Philip Gurian was released after spending a year in federal custody, given three years of supervised probation and a $100k fine on top of the $10m he’d already forfeited. One month prior, Michelle Lasso was fined $25k and ordered deported to Panama after pleading guilty to money laundering. In October 2013, New York resident Craig Hayner received a $250k fine and a conditional discharge.

MACHO SPORTS GUILTY PLEAS
Over on the left coast, three defendants have pled guilty to racketeering conspiracy charges relating to another Panama-licensed sports betting operation. In June 2013, the US Attorney for the Southern District of California charged 18 individuals for their involvement with the Lima, Peru-based MachoSports.com, a credit betting operation that processed wagers online while setting up accounts on the ground in cash.

On Friday, the feds announced that brothers Jan and Erik Portocarrero and a third man, bookkeeper Joseph Barrios, had pled guilty to racketeering conspiracy charges. Erik Portocarrero had been arrested in Norway and spent the last 22 months fighting extradition attempts. On Wednesday, his luck ran out and US federal marshals escorted him back to San Diego.

The defendants have agreed to waive any claim on the $12m in cash and property the feds seized during their 2013 takedown. Each of the three men is facing sentences of up to 20 years in prison and fines of up to $250k. All 18 defendants have now pled guilty to their charges.