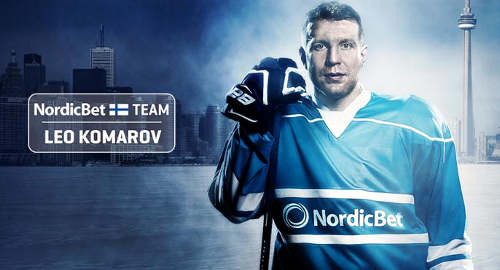 Online gambling operator Nordicbet has hired a National Hockey League player as its global ambassador, and the league says it has no problem with the arrangement.

The Leafs – why, for the love of God, isn’t it the ‘Leaves’ – expect to make the NHL playoffs this season and assistant captain Komrarov hopes the team goes far. NordicBet are counting on Komarov to provide the betting site’s customers with comments and insights about the NHL action if/when the Leafs are eliminated.

Next to the National Football League, the NHL has been one of the more vocal opponents of legal sports betting. In 2015, NHL commissioner Gary Bettman justified his betting antagonism by saying he didn’t want fans “rooting for anything other than the team that they love … to win. We don’t want there to be another reason.”

However, the NHL has since announced plans to launch an expansion franchise in Las Vegas, North America’s sports betting capital. That decision seriously annoyed Canadian politicians who have been trying for years to bring legal single-game sports betting to Canada but have been stymied, in part, due to the NHL’s oversized influence in Canada.

On Friday, Rogers Sportsnet quoted Komarov’s agent saying the Nordicbet deal had been cleared with the league. NHL deputy commissioner Bill Daly said Komarov’s deal “doesn’t violate our rules as long as he isn’t directly promoting sports wagering and as long as the advertising is limited to where NordicBet’s business is legal.”

That’s a far cry from the view Daly expressed in 2015 when delivering the NHL’s stance on Canada’s legal sports betting push, saying betting would “compromise the reputation and integrity of the NHL’s product, and could seriously undermine our fans’ trust and confidence in honest competition.” But you know, so long as it’s happening overseas, who cares?