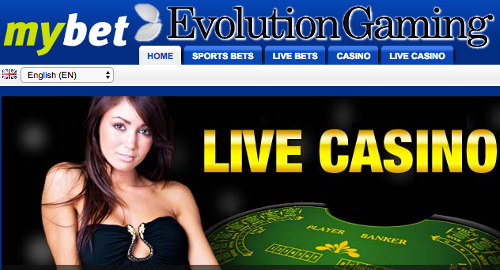 On Friday, Evolution announced a deal to provide the Mybet Group with its full portfolio of live casino products, including standard and VIP live gaming tables for desktop, tablet and smartphone devices. The service, which will also include Evolution’s Deutsches Roulette German-language product, expects to go live on Mybet sites in Q2.

The deal follows recent announcements of other Evolution live casino signings, including exchange betting operator Matchbook and UK-licensed gaming platform provider White Hat Gaming, both of which are also expected to launch in Q2.

Mybet CEO Markus Peuler said the Evolution deal is the latest step in his Malta-licensed company “completely revamping all of our offerings to create a fantastic user experience across both verticals.”

Mybet’s desire to overhaul its online product reflects the company reporting a “significantly reduced revenue base” in its most recent earnings report covering the first nine months of 2016. While the company’s retail betting operations and its European and African B2B activities showed a profit, the company’s other business areas continue to flounder.

Mybet’s struggles were blamed on “a lack of sustained impetus” from the Euro 2016 football tournament, “relatively weak business development” at the start of the European football season, and the “significantly” reduced revenue volume from its online casino offering.

To fund its product overhaul, Mybet made a very big bet on a successful conclusion to its long-running court fight with Westdeutsche Lotterie GmbH & Co OHG (aka Westlotto) over what Mybet calls the “illegal boycott of its business by the German Lottery and Pools Organization, in breach of competition law.”

The case involves an €11.5m payment Mybet was awarded in 2014 by a Düsseldorf court in support of Mybet’s claims of cartel infringement. But Westlotto has appealed the ruling, preventing Mybet from claiming its financial award.

Last October, Mybet announced that it had secured a credit facility that allowed it to access up to €5m of its “potentially arising proceeds” from the case. Last week, Mybet announced that the next hearing date in its Westlotto court case had been postponed to July 12 due to an application by the defendant’s representative.