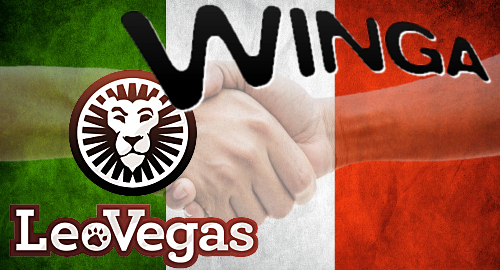 On Tuesday, LeoVegas announced that it had agreed to pay €6.1m cash for the Milan-based Winga, which offers a complete range of gambling products to its Italian customers. LeoVegas expects the deal to be complete by March 1, subject to approval by Italian authorities.

Winga reported revenue of €8m – half from its live casino operation – in 2016, and while it’s currently showing “a negative result,” LeoVegas says it has “identified a number of factors” that will turn that frown upside down.

PAF acquired Winga for an undisclosed price in 2015, and claimed at the time that Winga earned €10m in 2014, suggesting that Winga’s fortunes have dimmed. PAF CEO Christer Fahlstedt issued a statement on Tuesday saying PAF had lost interest in the Italian market and decided to sell after receiving “a generous offer.”

LeoVegas said Winga would benefit from LeoVegas’ “data-driven approach in marketing.” The company also said the LeoVegas brand would be “gradually introduced in the Italian market, suggesting the Winga brand’s days may be numbered.

The deal marks LeoVegas’ first major strategic acquisition, although the company is vowing that it won’t be the last. LeoVegas is sitting on around €55m in cash and claims to have evaluated “a dozen or so” possible deals of this nature last year.

LeoVegas CEO Gustaf Hagman called the acquisition “yet another milestone” in his company’s development, and in keeping with its strategy of boosting its regulated market presence. LeoVegas now has licensed operations in Malta, the UK, Denmark, Ireland and Italy.

Last week, LeoVegas reported its 2016 annual results, which saw revenue soar 70% to a record €141.4m, while earnings leapt to €16m from just €1.2m in 2015. Hagman humble-bragged that the numbers reflected “what is likely the largest organic growth in the world of any listed gaming operator.”

Hagman said LeoVegas enjoyed a particularly strong Q4, during which earnings spiked to €10m from just €400k in Q4 2015, due to “relatively lower but very effective marketing.” The company says 2017 has started off on the right foot, with January revenue totaling €14.1m.