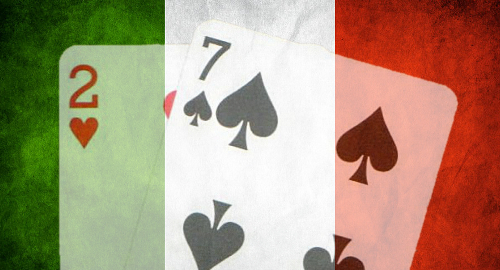 Recent market entrant Sky Betting & Gaming entered the bottom of the charts with €600k in sports betting revenue, despite the fact that the company has only just begun raising awareness of its Skybet.it site. This week saw Skybet launch a stylish new TV campaign (viewable here) promoting its new iPhone app around the tagline ‘Punta al meglio.’

The market’s online casino revenue totaled €45m in December, bringing the annual haul to nearly €439m, representing a 34% year-on-year gain for the vertical. December’s bounty was led by Lottomatica, which captured an 11% share. Runner-up Sisal wasn’t too far back at 8.5%, while Amaya Gaming’s PokerStars brand ranked third with 7.8%, ahead of Eurobet (6.6%) and William Hill (6.2%).

Speaking of PokerStars, it continued to dominate the Italian online poker market, capturing commanding shares of both tournaments (74.4%) and cash games (46.4%), with no other operator managing double digits in either category. Stars’ December tournament share was up 8.2 points year-on-year while its cash game share was down six points.