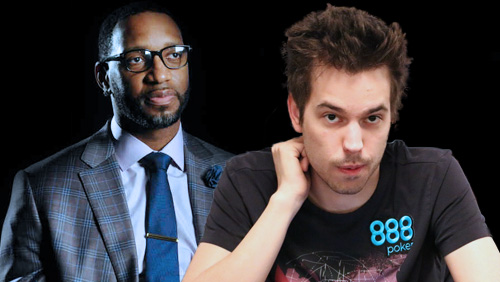 A flop and a turn for you as the World Poker Fund Holding Inc sign NBA All-Star Tracy McGrady as an ambassador, and 888Poker Ambassador, Dominik Nitsche, road tests a new 360 video camera.


World Poker Fund Holdings (WPFH) continue their growth after picking up the signature of the seven-time NBA All-Star, Tracy McGrady. The former Houston Rockets star joins the WPFH in an ambassadorial role where he will promote the CelebrityWorld.com social casino product.

The free-to-play online casino opened for beta testers on April 15 before a grand opening on May 1. Speaking at the time of the launch WPFH ambassador Soulja Boy said ‘this is going to be the biggest thing since online gaming started.’

McGrady said he was excited to join the gang, calling their model ‘genius’ and that it was ‘truly the next generation of online gaming experience.’ The press release also stated that McGrady’s place on the team will be leveraged to bring more NBA stars and pro athletes under the WPFH wing.

In an e-mail sent to me by Matthew Bird, president, 1-800-PublicRelations, Inc, he said that during May the WPFH had twice the media footprint than partypoker and PokerStars combined.

I suspect that traffic came about after WPFH Ambassador Soulja Boy tweeted a message about a pending $400m deal that later turned out to be the WPFH. Forbes contributor Shawn Setaro went all Sherlock Holmes and revealed that the WPFH had a market cap of around $52m and made a $400,000 loss in 2015. Hardly the kind of company that wants to be racking up a $400m wage bill.

“He’s young; he’s 25 years old. He got really excited, and he tweeted something he probably shouldn’t have tweeted.” Bird told Setaro at the time.

888Poker Ambassador, Dominik Nitsche, has been showcasing the latest live poker technology: a 360 video camera. The new piece of tech was used earlier this year at an 888 event held at Aspers Casino, Stratford.

When watching the video, you will notice in the top right-hand corner a control system that allows you to pan the camera angle around a 360-degree angle.

While a novelty, it’s not entirely convincing. For example, in the video below, where Nitsche is competing at a table with fellow 888Poker Ambassador Kara Scott, and former Man Utd and England star Andy Cole, I can’t see the flop. However, I am sure a genius will iron out the kinks, and it will become a useful voyeuristic tool of the future.

The man responsible for this camera was London-based pro panoramic photographer Tom Mills, and he said he sees ‘good possibilities’ for the use of a camera like this in poker but not at ‘live matches in big halls.’