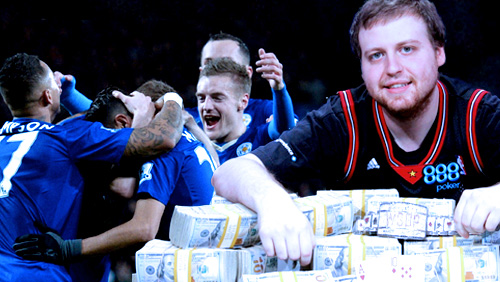 Leicester City chairman Vichai Srivaddhanaprabha hasn’t been shy with the £130m in additional cash that is now flowing his way courtesy of the Premier League fairytale to end all fairytales.

According to reports popping up in the UK tabloids, the Thai owner took the squad out for a meal after Spurs failure to beat Chelsea led to Leicester becoming the first Premier League champions to emerge from the so-called big teams pack since Blackburn in 1994-95.

A few bottles of the fizzy were downed before the team walked cognac in hand to the local casino where the gaffer placed £10,000 worth of chips and cash into the palms of each and every one of his players.

One assumes Jamie Vardy would have taken his £10,000 to the poker room. In June 2015, the Football Writers Player of the Year was filmed playing poker in a local casino with his then teammates Ritchie De Laet and David Nugent, when he got a little hot and bothered by the proximity of one of the spectators on the rail.

The man was of Japanese descent and after the pair exchanged words (The England ace accused him of peeking at his cards) Vardy let him have it by shouting out a series of expletives containing the word ‘Jap‘ many times.

I wonder if his fellow Japanese striker Shinji Okazaki also sat down in the game?

Srivaddhanaprabha has also vowed to buy each of his players a brand new Mercedes and a cut of £6.5m in bonus fees.

From one fairytale to another after an enthusiastic poker forum explorer came across a piece of gold from circa 2009. The post was spotted on a thread entitled “Should I Quit my Job?” on the surferspoker.com forum and it was written by the handle: Dude904.

Keen-eyed poker fans may notice that name as the Twitter handle from one Joseph McKeehen: WSOP Main Event Champion and winner of $11.5m in live tournament earnings. In the thread, Dude904, who had posted over 8,000 comments on the site, asked his community if he should quit his job as a supermarket attendant to focus on poker professionally?

While the account’s origin cannot be accurately verified as belonging to the World Champion, who likes to eat media people for breakfast, wouldn’t it be a delightful tale if it was real?

Several days after the find, surferspoker.com was shut down, and all access to the site denied, prompting speculation that McKeehen bought the site and sent it into space.

It’s about this time every spring that the WSOP host a conference with the media to iron out kinks and concerns in the build-up to the greatest poker festival in the world.

Only this time things are different.

The pow-wow will take place Thursday, May 19 at 4 pm (ET). Click here to join https://www.twitch.tv/wsop.

You can upload your questions in the chat section before the start of the stream. Alternatively, you can direct them to the WSOP’s Twitter account.