Leicester City’s star striker Jamie Vardy has been voted the Football Writers’ Association (FWA) Footballer of the Year for 2015/16, beating his teammates Riyad Mahrez and N’Golo Kante to the award after securing 36% of members votes.

Jamie Vardy has been named the Football Writers’ Association (FWA) Footballer of the Year for 2015/16 in a poll that saw no less than seven Leicester players receiving votes from 290 journalists.

It’s the first time since the 2010-11 season that a player who didn’t win the Professional Footballers Association (PFA) Player of the Year award has won the FWA version. PFA Player of the Year Riyad Mahrez finished second in the votes; N’Golo Kante was third – Danny Drinkwater, Kasper Schmeichel, Wes Morgan, and Danny Simpson also picked up votes. It’s the first time since 2004-05 that two different players from the same club has won the two major individual honours, after John Terry (PFA) and Frank Lampard (FWA) did the business for Chelsea. 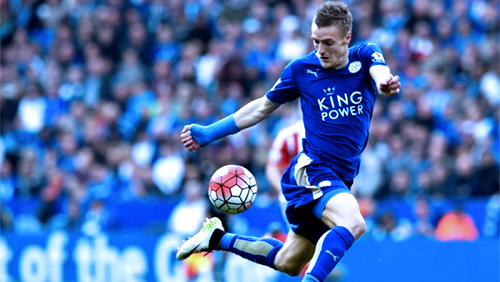 Speaking to Sky Sports about Vardy’s success FWA Chairman Andy Dunn said, “His goals and that record of scoring in 11 consecutive Premier League games – it set Leicester’s campaign alight. It captured the imagination of the writers. Also, this award for Jamie Vardy is recognition of the journey he has been on. It’s an incredible journey. The writers love the story of him coming from non-league.”

Vardy, 29, who scored 22 goals in 36 appearances in all competitions, including that Premier League record, was playing for non-league Fleetwood only four years ago. He also made his full England debut this season and has already scored two goals prompting calls for a place in the starting lineup in France.

In another first for Leicester, Vardy’s triumph is the first time a Leicester City player has won the FWA award. It’s also the first time in a long time that no player from Arsenal, Man United or Chelsea made an impression on the football writers.

Vardy was also given a special award at the PFA Awards ceremony for his 11 goal Premier League scoring record beating the one held by former Man Utd and Holland star Ruud van Nistelrooy.

Vardy told the press that it ‘was a great honour to win such a prestigious award,’ before going on to thank everyone who voted, his teammates, and his manager Claudio Ranieri.

It’s quite a turnaround for Vardy. Last season he only found the net five times and caused quite a stir when he was filmed calling a bystander a ‘Jap’ during a poker game in a local casino. In a majestic ironic twist, Leicester then went and signed Shinji Okazaki a few weeks later.

Vardy’s fairytale hasn’t only attracted the attention of the football writers. Hollywood script writers are also interested in the rags to riches tale. Rumours abound that a biopic of Vardy will be made with Vinny Jones rumoured to be playing Nigel Pearson, and Game of Thrones star Emilia Clarke set to play Vardy’s fiancee Rebekah Nicholson.

Who do you think should play Vardy?

What price are they to repeat their feat?

For 48-hours, TonyBet is offering the world’s best odds at 200-1, whereas the largest price found anywhere else is 40-1. Unfortunately, the maximum bet is only £10.

“By doing this we expect to run up the chance of a possible payout of over £5m,” Said TonyBet UK spokesman Warren Lush.