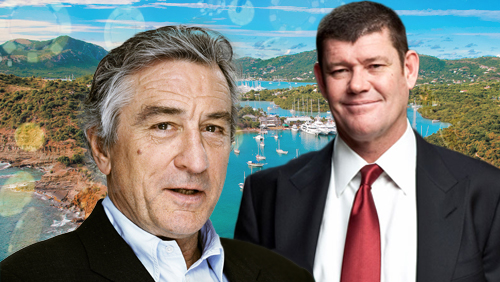 A new law has been passed that will expedite the development of actor Robert De Niro’s Caribbean resort and casino.

De Niro, with the help of his Australian billionaire BFF James Packer, plans to build a $250 million resort and casino, which includes a five-star boutique hotel, high-end eco-lodge, a marina with jetties for luxury yachts, a casino, and an airport for executive jets. The project will be located at the K Club site and will occupy 391 acres of undeveloped land in Barbuda Island.

The “Paradise Found” bill, which provides De Niro and Packer with a 25-year tax holiday in exchange for developing the project, was passed by the Antigua and Barbuda legislature on November 18, hours after it was introduced.

While the resort is expected to bring hundreds of jobs to the area, the plan is facing opposition from some locals and lawmakers.

Senate Minority Leader Harold Lovell, who voted against the bill, contends that the law will strip away the rights of the elected Barbuda Council to “consider and approve” large-scale property deals on the island.

“What the government is doing and the way they are proceeding is wrong,” The Guardian quoted Lovell saying. “A very bad precedent has been set. Every other investor could legitimately claim the wish to have some parliamentary force to give them whatever they desire.”

Antigua and Barbuda Prime Minister Gaston Browne, a strong supporter of the project and who had previously appointed De Niro as a “special economic envoy”, said that the Paradise Found Bill was initiated as the government felt the legislation was necessary to support a project.

“We respect their right to protest, and similarly they ought to respect our right to attract good, sound, tangible investments that grow the economy and put people back to work,” Browne said.