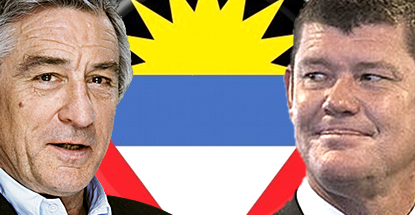 Are Crown Resorts boss James Packer and Hollywood actor Robert De Niro eyeing a casino in Antigua? On Saturday, Antiguan Prime Minister Gaston Browne announced that De Niro and Packer had signed a memorandum of agreement to invest over $250m to expand the dormant K-Club on Barbuda into an exclusive five-star resort. The new resort will operate under the Paradise Found brand.

Browne said he hopes to conclude the deal within 30 days and for construction to begin within the next 12 months. In addition, De Niro was appointed as a Special Economic Envoy of Antigua and Barbuda. Browne said he believed De Niro’s “celebrity status will attract more American celebrities to Antigua and Barbuda and the Caribbean.” De Niro is said to be a regular guest at Antigua’s Jumby Bay vacation resort.

Browne made no mention of whether the Paradise Found project would include a casino. (De Niro has served as a pitchman for the Paradise Walker Hill Casino in Seoul, South Korea although that Paradise has no relation with Paradise Found.) In June, Antigua inked a $740m deal with China’s Yida International Investment Antigua to build a massive integrated resort on Antigua’s Guiana Island and the Crump Peninsula. Browne has been extremely active in attracting international investment to Antigua since the new PM was sworn in this June.

Packer and De Niro already have extensive business ties via Packer’s Melco Crown Entertainment joint venture. In January, De Niro’s Nobu restaurant and hotel chain signed on to build its first hotel in Asia as part of Melco Crown’s City of Dreams Manila, the integrated resort set to open next month in the Philippine capital. De Niro is also one of the Hollywood A-listers Packer’s Ratpac production company has enlisted to star in a promotional short film for Studio City Macau, Melco Crown’s latest Macau project that is set to open in mid-2015.

De Niro starred in Grudge Match, the boxing film that Ratpac helped bring to the screen last year and De Niro and Packer are involved in VDKA 6100, the premium vodka brand that launched last year.