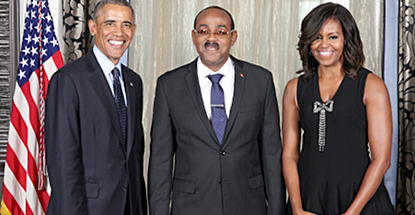 Antiguan Prime Minister Gaston Browne (pictured, surrounded by Obamas) may have become the first world leader to reference online gambling during a speech to the United Nations General Assembly. On Thursday, Browne made his inaugural address to the UN after being voted into power three months ago. A good portion of his speech consisted of his pleas for a resolution of his country’s longstanding online gambling trade dispute with the US.

Browne’s speech celebrated the UN’s history of helping to avert some of the world’s major crises, and while he acknowledged that the UN hadn’t always lived up to its stated goals, he remained a “steadfast believer in the worth” of the UN. But Browne noted that the world’s most powerful nations had “too often used their privileged positions to weaken the authority of the organization in advancement of their own narrow interests.”

Browne said he’d like the UN to “give a greater voice to those countries such as mine that are marginalized in decision making because we are considered to small to make a difference.” Countries like Antigua relied on international bodies like the UN “to protect us from incursions on our sovereignty and disregard for our rights.”

At this point, Browne informed the Assembly that it has been “ten long years since my small country – with a population of less than one hundred thousand – secured a favorable decision by the Dispute Settlement Body of the World Trade Organization in a complaint against the United States.”

The decision Browne referred to involved Antigua’s domestic online gambling industry, which had seen its access to the US market denied by US authorities. In 2003, Antigua filed a complaint with the WTO , arguing that the US didn’t have the right to bar Antigua-based online gambling operators from accessing US customers while simultaneously permitting US horseracing operators to accept online wagers. The WTO has uniformly sided with Antigua throughout numerous US appeals and ordered the US to pay Antigua an annual $21m until the dispute was resolved. The US has to date paid Antigua nothing.

Earlier this month, Antigua revealed that it had made a “significant concession” in its efforts to secure a fair resolution to the dispute. Mark Mendel, the attorney who had been assisting Antigua in its quest, was told his services were no longer required after the government opted to continue negotiations “on a bilateral basis.”

BROWNE URGES OBAMA TO LIVE UP TO HIS RHETORIC
Browne told the UN that America’s unwillingness to abide by the WTO’s rulings had denied his country income that would have “contributed significantly to the welfare of my people, and to the capacity of our economy to cope with the grave effects of climate change.” Browne said Antigua had taken the US to the WTO “not as an act of hostility to a neighbor” but because the government “had a duty of care to our people.”

Browne credited the WTO with having delivered justice for Antigua but the US refusal to acknowledge this justice had exposed the WTO’s weakness. Browne warned that if democracy and the rule of law were to prevail, “they have to be upheld and respected by the powerful as much as they are imposed on the weak.”

Browne noted that US President Barack Obama had addressed the Assembly only the day before. Referencing Russia’s ongoing interference in Ukraine’s domestic affairs, Obama said he believed “bigger nations should not be able to bully smaller ones” and that the world couldn’t endure a system in which “might makes right.” Browne said that if the US sincerely believed this to be true, then it should “settle this long outstanding [WTO] judgment fairly and expeditiously.”