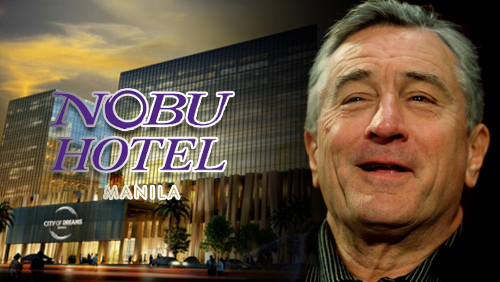 De Niro, his partners and Melco Crown Entertainment principals James Packer and Lawrence Ho led the ribbon cutting during the grand opening of the 321-room hotel within the City of Dreams Manila in Entertainment City.

The Nobu brand is known for 36 restaurants in 31 cities across five continents. Today, Nobu has eight hotels, including Nobu Hotel at Caesars Palace in Las Vegas, which opened in 2013.

“Our partner Chef Nobu Matsuhita has established Nobu as a global luxury hospitality brand and guests will experience the very best of Japanese culture here at this beautiful hotel,” said Packer.

The Oscar-winning actor also said that he could get involved in new ventures in the Philippines.

“There could be other locations in the Philippines. One would be good is a Nobu Resort. If we find the right real estate, the right place, it’s very possible in the future,” De Niro said at a press conference.

Nobu Hospitality plans to open eight other Nobu hotels in the next two years in North America, the Middle East, London and more in Asia.

NEW RESORT CASINO PLANNED IN CEBU
The Philippine government continues to encourage foreign companies to invest in its casino industry and construct mega-casino resorts, not only in Manila but also in other cities in the country.

The new casino resort will feature three seven star hotels and a high-end shopping mall and is expected to attract a large number of tourists, creating over 6000 employment opportunities for the locals and generating millions of dollars in tax revenue.

The Mactan mayor recommended the project to the city council. If the council approves the project, he promised to submit a “no objection” letter to the Philippine Amusement and Gaming Corp. (PAGCOR).

“This will help the city attract even more tourists. There might also be more chartered flights to the city since the casino’s market is mainly foreigners,” said the mayor.

Mactan Leisure City is expected to open in 2017.