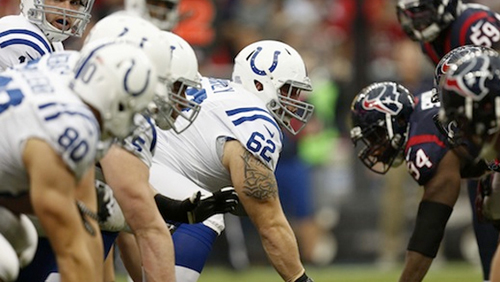 The Colts and Texans opened the NFL Week 5 schedule last night in Houston and, in spite of Andrew Luck’s continued absence, Indy prevailed 27-20 over its AFC South rival. Chuck Pagano’s squad now owns a 2.5 game lead in the division, which is considered the weakest in the league.

Sunday’s lineup finds the Patriots, Broncos, Bengals and Packers looking to extend what are fairly significant early division leads as well. And they are all favored to do so, drawing spreads of -9.5, -4.5, -3 and -9, respectively. The public is in love with them at those numbers too. New England and Denver are taking 88 and 77-percent of the betting share while Cincy and Green Bay are each getting 62-percent of the against the spread money.

Chicago Bears at Kansas City Chiefs (-9, Over/Under 45, 54% backing the Bears ATS): Jay Cutler stepped back under center for Chicago last week and his presence paid dividends. The Bears registered their first win of the season, defeating the favored Raiders (yes, I said favored) 22-20 at Soldier Field. This week the signal calling curmudgeon will take aim at a Chiefs defense that has been an utter disappointment, ranking dead last — along with Chicago — is points per game allowed with a 31.2 average. And say what? The Bears are getting nine points. Well, the Chiefs may own the same 1-3 record as Chicago, but the talent level between the two teams is still considered a wide one. Da Bears are also 0-5 in their last five games playing on the road off a home game and they dropped those five games by an average of 16.2 points per contest.

Seattle Seahawks at Cincinnati Bengals (-3, Over/Under 43.5, 62% backing the Bengals ATS): The Bengals are getting some love and deservedly so, but there are still a good number of folks waiting for the other shoe to drop with Andy Dalton. Big Red is having a brilliant season (1187 yards, nine touchdowns, one interception); however, he has compiled his impressive numbers against most poor pass defenses. Seattle’s famed secondary, which ranks fifth in the league in pass yards per game allowed, will present Cincinnati’s offense with its stiffest test to date. Can it lower the boom on Dalton and company? We shall see.

Washington Redskins at Atlanta Falcons (-7, Over/Under 48, 74% backing the Falcons ATS): It is probably safe to go ahead and label the Falcons for real. But even if they weren’t, they’d still have a chance in the NFC South, which resides just one block north of the AFC South in the low rent district. Washington, though, is still a bit of an unknown commodity. There are definitely things to like about the 2-2 Redskins, most notably their defense, but the team’s penchant for turnovers is troublesome. If they fail to keep the ball under wraps in Atlanta on Sunday, a third loss seems almost inevitable.

Jacksonville Jaguars at Tampa Bay Buccaneers (-3, Over/Under 42, 62% backing Jaguars ATS): This clash of Florida Titans will not draw the largest viewing share on the NFL Sunday Ticket, unless fans are suddenly enamored with poor quarterback play. Blake Bortles and Jameis Winston are 35th and 38th in passer rating, respectively, and they have combined for 10 interceptions and an ugly 54.7 completion percentage. The odds makers are leaning toward Winston in this one, though, and that is nothing if not telling. Tampa Bay has lost 11 straight at Raymond James Stadium and yet it is favored by three over Jacksonville. This much is certain: a streak of some kind is going down on Sunday because the Jags have dropped their last 11 road games.

New Orleans Saints at Philadelphia Eagles (-5.5, Over/Under 49, 61% backing Saints ATS): The Disenchantment Bowl kicks off in Philly on Sunday as Chip Kelly’s flightless Eagles welcome a miserable group of Saints to Lincoln Financial Field. New Orleans is coming off its first win of the season, an overtime triumph against the injury racked Cowboys, but it is still taking 5.5 points from a team fluttered its way to the same 1-3 start. Someone somewhere obviously expects Sam Bradford and Philadelphia’s 29th ranked offense to have some success against a Saints defense that is giving up over 8.7 yards per pass. If they don’t, Kelly may feel the need to start looking over his shoulder.

Cleveland Browns at Baltimore Ravens (-7, Over/Under 43, 54% backing Ravens ATS): It’s the Browns versus the team formerly known as the Browns, but one of these teams is not like the other. Oh yes, they are both 1-3 and surrounded by questions marks right now, but John Harbaugh has done enough to warrant some faith in his team. But Cleveland has, perhaps, done even more to sustain belief in what it is not able to do. Like, say, win its division opener. According to the Elias Sports Bureau, the Browns last did that in 2004. Unfortunately for Cleveland, Sunday’s showdown with Baltimore marks its first 2015 meeting with a divisional opponent.

St. Louis Rams at Green Bay Packers (-9, Over/Under 45.5, 62% backing Packers ATS): The Rams rained on the Cardinals undefeated parade last week and in Arizona no less; can they do the same on Sunday to the Packers? The answer, based on the nine point line, is an unequivocal no. Green Bay has won 11 straight at Lambeau and it is 20-1 (15-6 against the spread) in its last 21 home games when favored by nine or more points. Nonetheless, St. Louis may put up a bigger fight than most are anticipating. The Rams offensive strength (running the ball) is the Packers defensive weakness and they feature one of the league’s better pass defenses (5.66 yards per pass attempt allowed).

Buffalo Bills at Tennessee Titans (+2, Over/Under 42.5, 75% backing Bills ATS): The Bills did next to nothing right last Sunday, posting 313 yards, 14 first downs and 17 penalties in a 24-10 home loss to the Giants. Tennessee was not afforded the opportunity to produce a nose-pinching effort of its own as it sat out last week’s action with a bye. Can Rex Ryan coax a better showing out of his troops in Nashville? Maybe if he offers them the right goddamn snack.

Arizona Cardinals at Detroit Lions (+3, Over/Under 45, 83% backing Cardinals ATS): Arizona fell from the ranks of the undefeated last Sunday, losing 22-24 to the Rams in Glendale. Detroit, meanwhile, preserved its winless status with a controversial Monday Night Football loss in Seattle. While the Lions are still in search of their first victory, they have, for the most part been competitive. But can they muster anything for the Cards on short rest and long disappointment? Arizona is 4-0 both straight up and against the spread in its last four games playing as an away favorite coming off a home game. And Detroit, well, it is 0-5 straight up and 1-4 against the spread in its last five games playing as a home underdog coming off a road loss.

New England Patriots at Dallas Cowboys (+9.5, Over/Under 49.5, 88% backing Patriots ATS): The Cowboys are a few hands short around the corral, an unfortunate development that contributed significantly to losses against Atlanta and New Orleans the last two weeks. Now they get a rested Patriots squad that racked up 119 points in its first three games. Not a good sign for Dallas and its suddenly struggling defense. The Pokes yielded 65 points and 876 total yards in their last two outings, which suggests Tom Brady and company may be the ones with their “guns blazing” on Sunday.

Denver Broncos at Oakland Raiders (+4.5, Over/Under 43.5, 77% backing Broncos ATS): It’s an old fashioned AFC West showdown and the odds makers are anticipating the same old result when these two longtime foes hook up. Denver owns a 31-21 series advantage and it has won seven straight against Oakland, defeating the Raiders by an average of 21.6 points per game. The Silver and Black may be on the rise, but last Sunday’s loss to the Bears proves the Raiders still have a long way to go before they are equal footing with the Broncos.

San Francisco 49ers at New York Giants (-7, Over/Under 43.5, 73% backing Giants ATS): The 49ers team that stuffed, stymied and embarrassed the Vikings 20-3 in Week 1 went into hiding shortly after that game and it has not been seen since. Playing in its stead is a team that has scored 28 points over a three week period. Will a cross country trip help San Francisco get things in order? Doubtful. The Niners are 0-4 in their last four road outings and Colin Kaepernick played a large part in the four setbacks, tossing a total of six interceptions.

Pittsburgh Steelers at San Diego Chargers (-3, Over/Under 45.5, 54% backing Chargers ATS): The Steelers will, for the third time this season, showcase their wares in front of a national television audience. Mike Tomlin and his staff are hoping they look a little better this week than they did last Thursday night when they lost 20-23 to Baltimore at Heinz Field. San Diego, at 2-2, looks like a team that could be picked off; however, the Chargers offense, which is cranking out over 410 yards per game, will give the Steelers secondary plenty to think about.