Bills-Pats: Rex Ryan Eager For Another Shot at Belichick 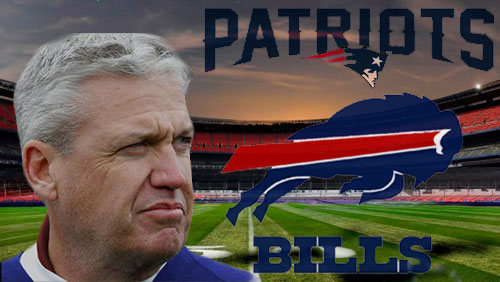 Rex Ryan always made it a point to make it kind of personal when he went against the New England Patriots as the head coach of the New York Jets. No one expects much to change now that he is at the helm of another AFC East rival, the Buffalo Bills. It is with this in mind that NFL bettors will check out these two teams in action, starting at 1 PM ET at Ralph Wilson Stadium in Orchard Park, NY.

The Bills were the NFL’s best defense last season with regard to points allowed per drive, and they retained much of their strength from last season, with the only major differences being the absence of linebacker Kiko Alonso (trade), who was injured anyway, and the switch from Jim Schwartz to Dennis Thurman as the defensive coordinator. They were a real pain in the neck for Andrew Luck to deal with last week. Luck completed just 26 of his 49 passes and tossed two interceptions, as the Bills were in his face much of the day. By getting out to a two-touchdown lead early, the Bills also rendered Indy’s revamped running game relatively useless. And Tyrod Taylor, the starting quarterback as named by Ryan, went 14 of 19 for 195 yards, and did not suffer a sack.

What was kind of interesting about Buffalo’s performance last Sunday was that LeSean McCoy was not a very big part of it. McCoy had 17 carries for 41 yards, a paltry 2.4 yards per attempt. However, Karlos Williams was available for some balance (six carries, 55 yards) and that will be some comfort for Buffalo fans, since McCoy  is reportedly still bothered by a bad hamstring. Those injuries have a way of lingering.

In the NFL betting odds that are posted on this game, the Bills are very slight favorites:

The general perception was that with Ryan taking over, there was a chance that the Bills could get over the hump and make it to the playoffs for the first time since the 1999 season. After all, they did go 9-7 under Doug Marrone last season. And they appeared to have the kind of “in your face” defense that Ryan likes. And one of the members of that defense is back in action this week, as defensive tackle Marcell Dareus has served his one-game suspension.

Tom Brady had a nice opening game, going 25 for 32 with four touchdowns against the Pittsburgh Steelers. Three of those scoring throws went to All-World tight end Rob Gronkowski, and that is something for Buffalo to worry about. But part of Brady’s success involved the fact that – as he pointed out – the Pittsburgh secondary looked a little confused and unprepared, and he took advantage of the fact that leadership on the unit had shifted from former coordinator Dick LeBeau to his replacement, Keith Butler. We don’t imagine such conditions will exist with the Bills, although we must mention that cornerback Leodis McKelvin has been out with a broken ankle.

The Pats are a little thin right now. LaGarrette Blount returns from his one-game suspension this week, but there isn’t much behind him. Brandon Lafell is injured and out of action, and he represents a downfield threat for New England. Three rookies had to start on the offensive line in the opener, and that kind of inexperience may carry with it a price here. On defense, there are still issues that will have to be resolved with the secondary, which lost both starting corners in the off-season. And the absence of the departed Vince Wilfork may have greatly contributed to Pittsburgh’s proficiency on the ground (e.g., 127 yards from DeAngelo Williams), even minus Le’Veon Bell.

The Bills will unquestionably be sky-high to begin with, and Ryan will whip them into a frenzy. They can get it done here.

Charles Jay is a gaming professional, content specialist and sports handicapper. For more of his NFL betting opinions, please visit his handicapping website, Plays By Jay, at http://playsbyjay.com