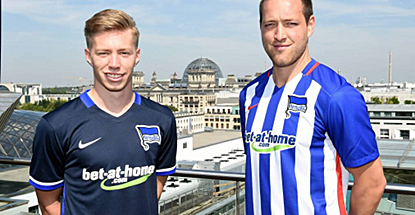 Betclic Everest subsidiary Bet-at-home has been officially unveiled as the new shirt sponsor of German football side Hertha BSC.

News of the tie-up was floated last month but the two parties didn’t officially announce their engagement until Thursday. The three-year deal will see Bet-at-home’s logo adorn the Bundesliga club’s home and away jerseys, plus major advertising rights at the Olympic Stadium in Berlin where Hertha plies tis trade. The two parties will also work together on online and social media campaigns.

Terms of the deal weren’t disclosed, but German media reported that the team stood to reap a hefty €6m per year. The deal will remain valid for the entire three-year term even if Hertha’s fortunes decline and the team faces relegation to the second division.

The confusion surrounding online sports betting’s legal status in Germany is well known, and the parties were quizzed at Thursday’s press conference regarding the legality of their pact. Gierke said both parties were confident that the deal wouldn’t result in legal action against either party.

NETBET INK GAZELEC AJACCIO
Just over Germany’s border, Malta-licensed NetBet has inked a partnership with French side Gazelec Ajaccio for the 2015-16 Ligue 1 season. The deal will see NetBet’s logo appear on the upper chest of the team’s jerseys, plus a branding presence in the club’s Stade Ange-Casanova playing ground and inclusion in the team’s official communication channels. The deal follows NetBet’s recent pact with English Premier League side West Bromwich Albion.

BWIN.PARTY SCRAP MAN U CASINO APP AFTER FIVE MONTHS
Across the English Channel, Wednesday’s announcement that Marathonbet had signed on as the new betting partner of EPL side Manchester United has led to the demise of the team’s Bwin.party-powered online casino app. The app, which only launched this March, has been removed from the Apple App Store.

A Bwin.party spokesman told eGaming Review that the decision to axe the app came as the company’s deal with the team expired this summer and “we no longer had the rights to the assets.” Plans to expand the app’s reach with other football clubs have also been scrapped as the struggling Bwin.party is making a “shift towards more CRM and digital marketing.”