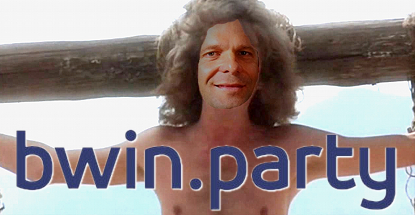 Revenue in the three months ending March 31 was €155.3m, but Bwin.party CEO Norbert Teufelberger (pictured) chose to look on the bright side, saying this was an improvement of 6% from Q4 2014 and thus proof that their efforts to right the sinking ship are paying off. In particular, Bwin.party pointed to its oft-derided mobile channel, which saw its share of overall revenue rise to 30% from just 17% in the same period last year.

Casino and other games handle rose 1% but lower VIP activity and new value added taxes pushed revenue down 11% to €46.8m. Mobile’s share of the casino pie improved 12 points to 21% but daily average players were flat and real-money signups fell 29%.

PartyPoker was a disaster, with revenue down 31% to €16.8m, daily average players down 30% and real-money signups down 37%. Bwin.party said that while it had witnessed “a recent improvement in player trends,” it nonetheless expects the overall suckiness to persist into the traditionally slack summer period.

Bingo revenue was up 1% to €13.8m, despite a 14% decrease in daily average players. Real-money signups rose 24% and yield per unique active player rose 29%. Bwin.party said Foxy Bingo’s recent marketing push had boosted UK bingo revenue by 8% but “declines in non-core labels” dragged down the overall figure.

The company says it’s on track to realize its €40m to €50m target for divesting its non-core business. The sale of its Win social gaming operation was completed in March.

BWIN.PARTY SUITORS TO LEARN FATE IN “COMING WEEKS”
Bwin.party offered little in the way of news on its potential sale – in whole or in pieces – to either 888 Holdings or the Amaya Gaming/GVC Holdings tandem. Both offers involve “a significant element of share consideration” and Bwin.party’s board is assessing the merits of each bid. The company says it expects to “reach a conclusion over the coming weeks.”

Trading in Q2 to date is up 6%, driven by a 25% gain in sports betting. This leaves the company “on-target” for its full-year 2015 projections, assuming it’s still in one piece by the time the new year rolls around. Bwin.party shares closed out Thursday’s trading up 2% to 105.5p.

Peel Hunt analyst Nick Batram said that Bwin.party’s dire “track record” meant that a brief spate of positive news was “not enough to view this as the start of a sustainable recovery.” However, Batram believes 888/Amaya/GVC were well positioned with their takeover bids, “just in case it is the start of a turnaround.”